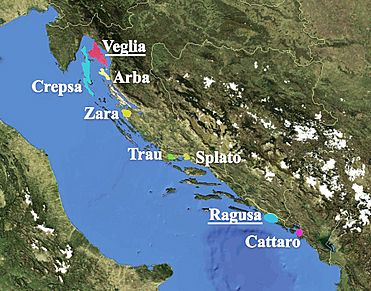 Cities on the Eastern Adriatic Sea, with the Dalmatian dialects. Veglia is the Croatian Island Krk, Crepsa is the island Cres, Arba is called Rab today. Zara is the city Zadar. Trau is called Trogir, Splato is Split, Ragusa is Dubrovnik, and Cattaro is Kotor today.

Dalmatian was a Romance language, which was spoken in Dalmatia, on the Eastern Adriatic Sea. The language became extinct in the Middle Ages. In places it was used until the 18th or 19th century. Today, few sources are left. Only the dialect of Veglia (Krk) and Ragusa (Dubrovnik) have enough sources so they can be studied. From the other dialects, there are only isloate words, or short phrases.

In 1897, the scholar Matteo Bartoli, himself a native of nearby Istria, visited postman Tuone Udaina (Italian: Antonio Udina), nicknamed burbur ('barber' in Dalmatian) the last known speaker of any Dalmatian dialect, to study his language. Bartoli wrote down approximately 2,800 words, stories, and accounts of his life, which were published in a book in German (Das Dalmatische) in 1906. That book has provided much information on the vocabulary, phonology, and grammar of the language.

One year after the interview, on 10 June 1898, Tuone Udaina was accidentally killed at 74 in a roadwork explosion.

All content from Kiddle encyclopedia articles (including the article images and facts) can be freely used under Attribution-ShareAlike license, unless stated otherwise. Cite this article:
Dalmatian language Facts for Kids. Kiddle Encyclopedia.