Danco Island or Isla Dedo is an island off Antarctica, 2 kilometres (1 nmi) long lying in the southern part of Errera Channel, off the west coast of Graham Land. It was charted by the Belgian Antarctic Expedition under Adrien de Gerlache, 1897–1899. Danco Island was surveyed by the Falkland Islands Dependencies Survey from Norsel in 1955, and named by the UK Antarctic Place-names Committee for Emile Danco (1869–1898), a Belgian geophysicist and member of the Belgian Antarctic Expedition, who died on board Belgica in the Antarctic. 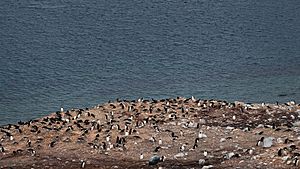 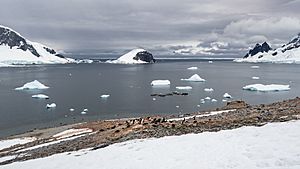 Danco Island was the location of the British research Station O. It was active from February 26, 1956 to February 22, 1959 with the intention of searching in the survey and geology. The main hut was named Arendal and was demolished and removed by British Antarctic Survey in April 2004.

All content from Kiddle encyclopedia articles (including the article images and facts) can be freely used under Attribution-ShareAlike license, unless stated otherwise. Cite this article:
Danco Island Facts for Kids. Kiddle Encyclopedia.