He gained national recognition on the TV show Custe o Que Custar (CQC), aired on the Band network. Gentili then created and hosted Agora É Tarde (2011–2013), a late-night talk show on the same network, later moving to the SBT network with talk show The Noite com Danilo Gentili (2014–present). Gentili is also a partner in two stand-up comedy clubs, has written four books, and has acted in, written and produced films.

Gentili was born in Santo André, the youngest son of a housewife and a typewriter technician. He is of Italian descent. His paternal grandfather, Ulderico Gentili, was a church painter who left Italy for São Paulo, Brazil, during World War II. He was raised in the tenements of Parque das Nações neighborhood near Santo André, and later moved to São Paulo. When he was 18, his father died of a heart attack. Six months later his older sibling, Karina Gentili, died in a car accident.

In 2003, Gentili graduated from the Grande ABC University (UniABC) with a degree in social communication (advertising).

Gentili also worked at a cartoonist and caricaturist. In 2008, he collaborated with the Brazilian edition of Mad magazine. During 2008–2009, he wrote a column for Metro Jornal, a popular newspaper in Brazil, and was recognized as "Paulistano of the Year" by Veja magazine.

In 2008, Gentili appeared on the series Custe o Que Custar (CQC, lit. Whatever it Takes), broadcast by Rede Bandeirantes. Gentili initially performed in a segment called the "Reporter Inexperiente" (English: Inexperienced Reporter) where he asked his guests awkward and unexpected questions with often bizarre turns of events. The segment was an immediate hit and led to a broader take on the same theme where he began to interview people in public, especially about politics.

Gentili became notorious for confronting politicians with humorous but piercing questions which often exposed or embarrassed them, and became known as the terror dos políticos (English: terror of the politicians). His antics sometimes became newsworthy, such as when he was banned from the National Congress after questioning Senator Renan Calheiros about corruption charges. On other occasions, he was physically assaulted by a senator's bodyguard, and detained by police after exposing a public school's administration problems. His fans seemed to connect strongly with his humor, particularly as Brazilian politics continued to spiral into repeated scandals.

During the 2010–11 season of CQC, Gentili also featured in the segments "Proteste Já" (English: Protest Now) and "National Identity" as well as other comedic pieces commenting on national political events.

In late 2009, Panda Books [pt] published his first book, Como se Tornar o Pior Aluno da Escola [pt] (English: How to become the worst student in school). The satirical instruction manual soon received a warning label recommending it for those over the age of 18.

In August 2010, Gentili partnered with Rafinha Bastos and Ítalo Gusso to found Comedians Comedy Club, at Rua Augusta in São Paulo. It was among the first clubs in Brazil dedicated to stand-up comedy.

The day before Brazil's 2010 presidential election, with a television ban on political humour, Gentili released Politicamente Incorreto [pt] (English: Politically Incorrect) on the Internet. This stand-up show was written and performed by Gentili, in which he spoke of every presidential candidate that year. It was streamed on Universo Online (UOL), Brazil's largest Internet portal, attracting 1.2 million viewers. The performance was later released on DVD and audiobook formats, and received worldwide attention including reviews by The New York Times and The Guardian. Gentili released a book of the same name [pt] in which he offered humorous criticism of the political times.

Gentili developed a late-night talk show with CQC writer Alex Baldin; a TV pilot was made a condition of his 2009 contract for CQC, and was recorded in 2010. Agora É Tarde (English: It's too late) premiered in June 2011 on Rede Bandeirantes, with Gentili hosting. It cast Ultraje a Rigor as its supporting band and included comedy routines, stand-up and round-table discussions with other comedians in addition to bringing Brazilian celebrities as the main guests.

Despite doubts from the mainstream media, the show received excellent ratings for its time slot and was expanded from two to three nights per week. Newspaper O Globo named Agora É Tarde the best TV show of the year and Gentili the best TV show host. It was also chosen by the Brazilian Press Association as the 'Best Talk Show' in the 2012 edition of their awards.

In November, he released the DVD Danilo Gentili: Volume 1, a 90-minute compilation of his stand-up performances.

The second season of Agora É Tarde was simulcast on BandNews FM. The show expanded to a fourth weeknight as it reached its 100th episode.

In June 2012, Gentili's third book, A Vida e Outros Detalhes Insignificantes [pt] (English: Life and Other Insignificant Details), was published. It related his family's customs and details of old relationships mixed with ideas from his stand-up shows.

Gentili had his film acting debut in Mato sem Cachorro which premiered at the 2013 Rio de Janeiro Film Festival. According to critic Raphael Max, Gentili brought laughs to every scene shared with his co-star.

Financial difficulties at Rede Bandeirantes brought cuts to Agora É Tarde in December 2013 and a scale-back of comedy specials. Amid speculation of dissatisfaction by Gentili, he was bought out of his contract by Sistema Brasileiro de Televisão (SBT).

With most of his team from Agora É Tarde, SBT launched Gentili's new late-night talk show, The Noite com Danilo Gentili (English: The Night with Danilo Gentili) on 10 March 2014. The program exceeded the broadcaster's expectations, doubling its audience in that time slot. Critics praised the show, which they said was on the same level as U.S. late shows.

In February 2015, Gentili opened another stand-up venue, The Comedy Club in Orlando, Florida. Comedian Diogo Portugal [pt] joined as a partner in the venture.

In August 2016, filming began on Como se Tornar o Pior Aluno da Escola, an adaptation of Gentili's first book with Gentili as creator, producer and screenwriter. It was released in April 2017 to mostly negative reviews. 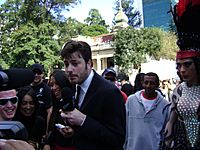 All content from Kiddle encyclopedia articles (including the article images and facts) can be freely used under Attribution-ShareAlike license, unless stated otherwise. Cite this article:
Danilo Gentili Facts for Kids. Kiddle Encyclopedia.