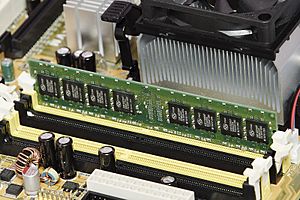 1 GB of SDRAM mounted in a personal computer. An example of primary storage.

Computer data storage is the name for a number of components of a computer. The main purpose of these components is to store data. The central processing unit is then able to fetch and change the data. In most computers, there is a computer memory hierarchy: Memory that is "closer" to the CPU is usually faster to access, but it is also smaller; data that is stored in this kind of memory usually needs electrical power to keep the data.

Memory that is farther away is usually slower to access, but also bigger. Examples for this kind of data are classical storage media, such as hard drives or USB flash drives. Some media offer even more capacity, but accessing them is very slow. Examples for such media are tape drives. Modern CPUs have registers that can store data, they also often have several levels of cache.

Finally, there is the main memory the CPU can access. These three are usually referred to as Primary data storage.

All content from Kiddle encyclopedia articles (including the article images and facts) can be freely used under Attribution-ShareAlike license, unless stated otherwise. Cite this article:
Computer data storage Facts for Kids. Kiddle Encyclopedia.