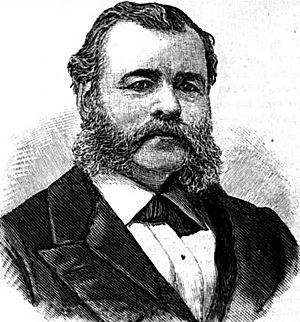 Born in Macedon, New York, Richardson attended the common school and the local academy at Macedon. He was graduated from Yale College in 1856. He studied law in Rochester, New York. He was admitted to the bar in 1859, and practiced.

Richardson entered the Union Army in 1861, and served over three years, achieving the rank of First Lieutenant in the 6th Regiment New York Volunteer Cavalry ("2nd Ira Harris Guard"). He served the last two years as a staff officer to the Cavalry Corps commander, and took part in most of the battles of the Army of the Potomac under Generals George Stoneman, Alfred Pleasonton, and David McMurtrie Gregg.

He resumed the practice of law in Angelica, New York, where he died on June 21, 1904. He was interred in Angelica Cemetery.

All content from Kiddle encyclopedia articles (including the article images and facts) can be freely used under Attribution-ShareAlike license, unless stated otherwise. Cite this article:
David P. Richardson (New York politician) Facts for Kids. Kiddle Encyclopedia.