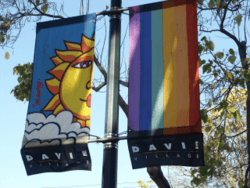 Davie Village (also known as Davie District or simply Davie Street) is a neighbourhood in the West End of Vancouver, British Columbia, Canada. It is the home of the city's LGBT subculture, and, as such, is often considered a gay village, or gaybourhood. Davie Village is centred on Davie Street and roughly includes the area between Burrard and Jervis streets. Davie Street—and, by extension, the Village—is named in honour of A.E.B. Davie, eighth Premier of British Columbia from 1887 to 1889; A.E.B's brother Theodore was also Premier, from 1892 to 1895.

All content from Kiddle encyclopedia articles (including the article images and facts) can be freely used under Attribution-ShareAlike license, unless stated otherwise. Cite this article:
Davie Village Facts for Kids. Kiddle Encyclopedia.