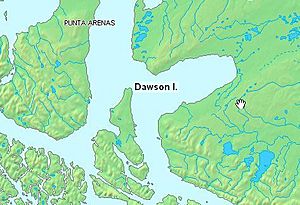 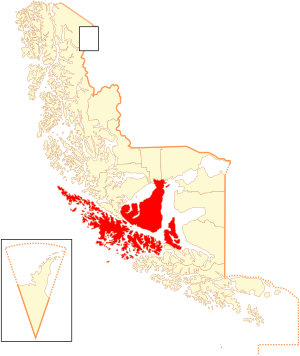 Dawson I. at east shore of strait of Magallanes

Dawson Island (Lat: 53º 58’ 12” S Long: 70º 34’ 48”W) is an island in the Strait of Magellan. It is in the Tierra del Fuego archipelago. It is 100 kilometres (62 miles) south of the city of Punta Arenas in Chile. It is part of the municipality of Punta Arenas. It is southeast of Brunswick Peninsula. It is an approximately 1,290-square-kilometre (500-square-mile) tract of land that often has harsh Antarctic weather. Its population was 415 as of the 1992 census, and 301 as of 2002. The settlements are Puerto Harris, Puerto San Antonio and Puerto Almeida.

All content from Kiddle encyclopedia articles (including the article images and facts) can be freely used under Attribution-ShareAlike license, unless stated otherwise. Cite this article:
Dawson Island Facts for Kids. Kiddle Encyclopedia.