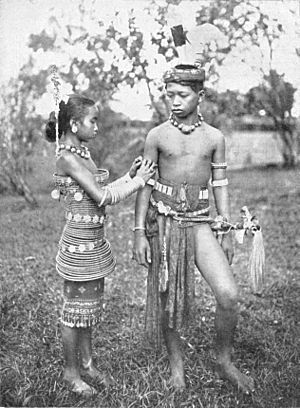 The Dayak are the native ethnic group of Borneo. There is no Dayak culture, because the word is used for many different groups of people. Dayak live on the island of Borneo, that is either in Brunei, Indonesia or Malaysia. Originally, the Dayak had their own religions, which were a mix of animism and shamanism. In the 20th century, many Dayak converted to either Christianity or Islam. Some didn't, and they call their religion Kaharingan. For reasons of classifying, Kaharingan has been made a form of Hinduism.

All content from Kiddle encyclopedia articles (including the article images and facts) can be freely used under Attribution-ShareAlike license, unless stated otherwise. Cite this article:
Dayak Facts for Kids. Kiddle Encyclopedia.