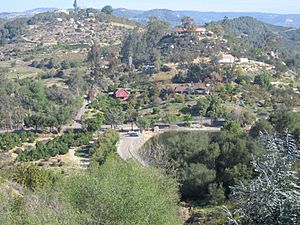 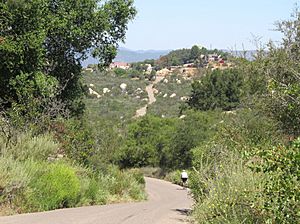 De Luz Heights is on the Santa Rosa Plateau of the Santa Ana Mountains. It is between De Luz Road to the west and Sandia Creek Road to the east. It is northwest of Fallbrook, southwest of Temecula. and borders Marine Corps Base Camp Pendleton on the west.

All content from Kiddle encyclopedia articles (including the article images and facts) can be freely used under Attribution-ShareAlike license, unless stated otherwise. Cite this article:
De Luz Heights, California Facts for Kids. Kiddle Encyclopedia.