De Smet is a city in and the county seat of Kingsbury County, South Dakota, United States. The population was 1,089 at the 2010 census.

Located in the area of South Dakota known as East River (east of the Missouri River, which diagonally divides the state), De Smet was platted by European Americans in 1880. It was named for Belgian Father Pierre De Smet, a 19th-century Jesuit missionary who worked with Native Americans in the United States and its territories for most of his life. In the mid 1880s, prairie fires and failures of crops after a three-year period of drought caused many settlers to relocate their farms and homesteads to easier areas. By 1917, De Smet was a cow town, with many trains passing through every day carrying cattle to market.

According to the United States Census Bureau, the city has a total area of 1.16 square miles (3.00 km2), all of it land. 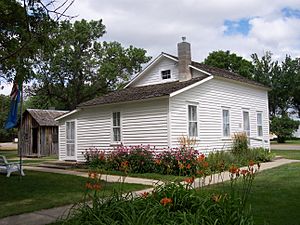 Since 1971, De Smet has hosted a pageant, held over several weekends in July, to honor Laura Ingalls Wilder. Five of her classic Little House books were based on her experiences in and around the community. The books were popularized anew in the 1970s and early 1980s, from the long-running TV series Little House on the Prairie, which was loosely based on them.

The story of how Charles Ingalls and his wife Caroline arrived in De Smet in 1879 by covered wagon from Walnut Grove, Minnesota, is told by a cast of thirty in an open-air theater near the old Ingalls homestead and the Surveyors' House. Nearby are Silver Lake and the Big Slough, locales mentioned in her books. Reminders of De Smet's pioneer past are evident throughout the town, including the First Congregational Church, where the Ingallses worshipped.

In 1894 Laura and her husband Almanzo Wilder, with their daughter Rose left De Smet to live on a farm in the Ozarks near Mansfield, Missouri. There Laura Ingalls chronicled her South Dakota memories in such works as The Long Winter, Little Town on the Prairie, and These Happy Golden Years. Many residents in De Smet have made a special effort to learn the Ingalls' stories in hopes of assisting inquiring tourists each summer. 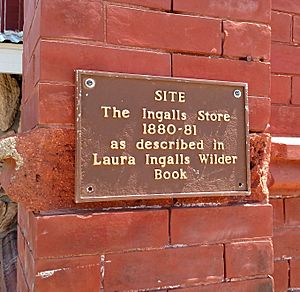 De Smet was the childhood home of children's book author Laura Ingalls Wilder and is the birthplace of her daughter, author and activist Rose Wilder Lane. Ingalls Wilder's father, Charles Ingalls, emigrated to De Smet in 1879 with his wife, Caroline, and their children Mary, Laura, Carrie, and Grace. There, after first living in the Surveyor House and a couple of other locations in De Smet, Ingalls built their permanent home that became known via Wilder's writings as "The House That Pa Built". Construction on the house began in 1887 and was completed in 1889. After settling in De Smet, Charles Ingalls owned and operated the Ingalls Store from 1880–1881, a small general-type store that sold various goods for the home. While the store building no longer exists, the location is noted in De Smet's downtown area with a marker on what's currently on the site, a former bank building that now houses Gass Law Firm.

De Smet was also the childhood home of supercentenarian Walter Breuning. Artist-illustrator Harvey Dunn was born in 1884 approximately eight miles from De Smet near Manchester, and painted scenes of frontier life in his later years. Harry George Armstrong, a major general in the United States Air Force, a physician, and an airman, was born in De Smet in 1899.

All content from Kiddle encyclopedia articles (including the article images and facts) can be freely used under Attribution-ShareAlike license, unless stated otherwise. Cite this article:
De Smet, South Dakota Facts for Kids. Kiddle Encyclopedia.