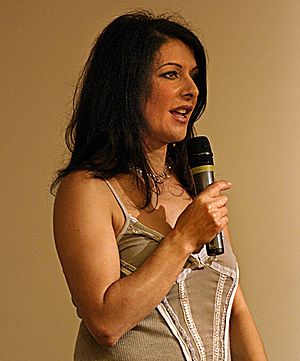 Deanna Troi is a Star Trek: The Next Generation character. Actress Marina Sirtis played the character on the television series and several movies.

Troi served as the ship's counselor. She is half human and half Betazoid. She can sense how others feel.

She also attended the University on Betazed were she studied psychology.

All content from Kiddle encyclopedia articles (including the article images and facts) can be freely used under Attribution-ShareAlike license, unless stated otherwise. Cite this article:
Deanna Troi Facts for Kids. Kiddle Encyclopedia.