Deepwater is a parish and village 40 kilometres north of Glen Innes on the Northern Tablelands, New South Wales, Australia. At the 2006 census, Deepwater had a population of 323, with 489 people in the area.

Deepwater is located on the New England Highway and the Main North railway line (now closed). The village is on the northern bank of the Deepwater River which is a tributary of the Mole River. 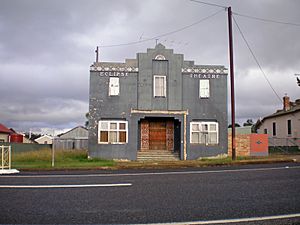 The land where Deepwater was established is the territory of the Ngarabal people, who had occupied and carefully cultivated the country for thousands of years. The Ngarabal name for Deepwater is Talgambuun, meaning dry country with many dead trees.

The Deepwater run was occupied in 1839 by William Cooins for the Windeyer brothers. In 1848 their run covered 60,000 acres (240 km2). The Windeyers had a close relationship with Edward Irby, who took up Bolivia Station further north. There was strong Ngarabal resistance to Irby and Windeyer's incursions into Ngarabal country, including the killings of shepherds. Irby's memoirs record that Windeyer joined him in pursuing and killing groups of Aboriginal people in retaliation for these acts. The principal incident of this was on October 17, 1844, when Irby records that he and Windeyer "gave it to them severely" near Bolivia. In addition, Commissioner for Crown Lands from the Clarence district, Oliver Fry, a group of Aboriginal people from further east into Ngarabul country at Deepwater, murdering five children, four women and seven men on April 15, 1845.

Deepwater now has an Apex Park, Gem and Mineral store, Bakery, School, two Hotels, Post Office, CRT, Roadhouse, Antique Store and Foodworks Supermarket. An annual race meeting is held in January at the Deepwater Racecourse located behind the Deepwater Golf Course and also the annual Scarecrow and Wool Festival Oct/Nov is held over 2 days at the oval with markets, car show, food stalls, wool and shearing exhibition and entertainment for the kids etc. It also has service organisations that include the Country Women's Association, Red Cross, Far West and Apex Club, SES and Rural Fire Service, pre-school and some other community organisations.

The district is an agricultural area with the main pursuits being wool, fat lamb and beef cattle production. In the past dairying, tin mining and timber were industries that contributed to the economy of the district.

All content from Kiddle encyclopedia articles (including the article images and facts) can be freely used under Attribution-ShareAlike license, unless stated otherwise. Cite this article:
Deepwater, New South Wales Facts for Kids. Kiddle Encyclopedia.