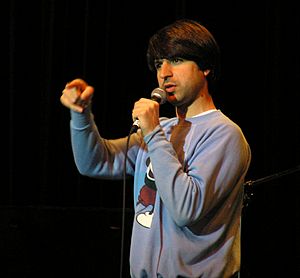 Demetri Martin (born May 25, 1973) is a Greek-American comedian, actor, artist, musician, writer and humorist. He was born in New York City and grew up in Toms River, New Jersey.

Martin is best known for his work as a stand-up comedian and as a contributor on The Daily Show. He hosted his own show on Comedy Central called Important Things with Demetri Martin.

All content from Kiddle encyclopedia articles (including the article images and facts) can be freely used under Attribution-ShareAlike license, unless stated otherwise. Cite this article:
Demetri Martin Facts for Kids. Kiddle Encyclopedia.