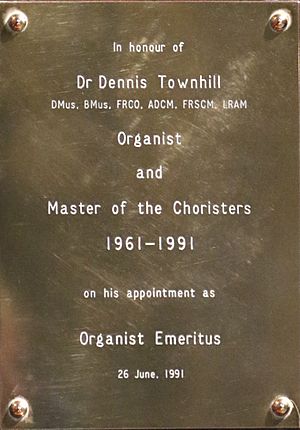 Born in Lincoln, he was educated at Lincoln School and studied under Dr Gordon Archbold Slater at Lincoln Cathedral.

Townhill composed a set of responses for use at Anglican evensong.

In 1970, Townhill became the driving force of a plan not only to safeguard the future of the Choir School of St Mary’s Cathedral, Edinburgh but to transform it into a new and vibrant entity. In 1972, the school was expanded into a specialist music school on the lines of the Yehudi Menuhin School, with Lord Menuhin becoming patron and referring to it as "my younger sister-school in Scotland".

He was organist and choir master at:

All content from Kiddle encyclopedia articles (including the article images and facts) can be freely used under Attribution-ShareAlike license, unless stated otherwise. Cite this article:
Dennis Townhill Facts for Kids. Kiddle Encyclopedia.