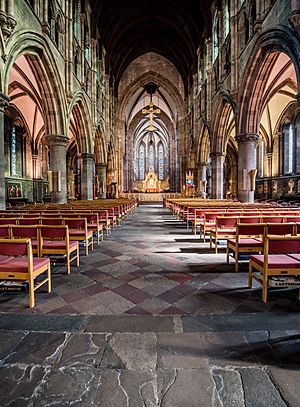 Interior of the Cathedral, looking towards the High Altar 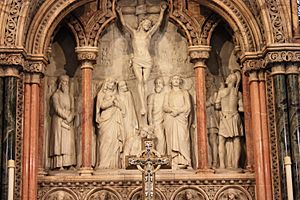 St Mary's Cathedral (Scottish Gaelic: Cathair-eaglais Naomh Moire) or the Cathedral Church of Saint Mary the Virgin is a cathedral of the Scottish Episcopal Church in Edinburgh, Scotland. It was built in the late 19th century in the West End of Edinburgh's New Town. The cathedral is the see of the Bishop of Edinburgh, one of seven bishops within the Episcopal Church, which is part of the Anglican Communion. Designed in a Gothic style by Sir George Gilbert Scott, the cathedral is now protected as a category A listed building. and part of the Old Town and New Town of Edinburgh World Heritage Site. Reaching 90 metres (295 ft), its spire makes the building the highest in the Edinburgh urban area.

In 1689, following the Glorious Revolution, Presbyterianism was restored in place of episcopacy in the national Church of Scotland. St Giles' Cathedral, Edinburgh, as it then was, came under the Established Church's ministry, resulting in Episcopalians being left without a cathedral in Edinburgh. For a time the Episcopal residue of that congregation worshipped in an old woollen mill in Carrubber's Close, near the site of the present Old Saint Paul's Church. This was used as a pro-cathedral until the early 19th century, when this function was served by the Church of St Paul in York Place. 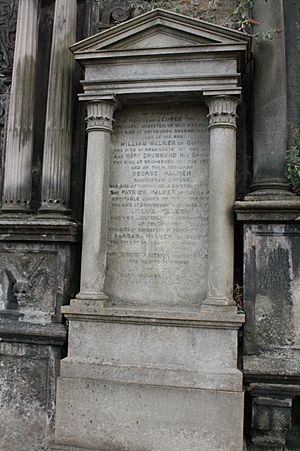 The grave of Barbara and Mary Walker, Greyfriars Kirkyard

The original construction was paid for by Barbara and Mary Walker, spinster sisters, providing funds for this purpose from 1873. The cathedral is built on their garden and the land was also part of the gift. They owned the surrounding Drumsheugh Estate and lived in Easter Coates House, which still survives to the north of the cathedral. They were the granddaughters of Rev. George Walker, the Episcopal Minister of Old Meldrum Church (1734-1781). Their father, William Walker, was Attorney in Exchequer, and Bearer of the White Rod of Scotland. William Street nearby is named after him. Their mother was Mary Drummond, daughter of George Drummond, six times Lord Provost of Edinburgh and initiator of the New Town. Their father, William Walker, bought the Coates estate from the Byres family around 1800 and is remembered in the street names William Street and Walker Street.

The cathedral was designed by Sir George Gilbert Scott and the foundation stone was laid on 21 May 1874 by the Duke of Buccleuch and Queensberry, whose family had been supportive of Scottish episcopacy over the previous hundred years. Inside the stone was placed a bottle containing a copy of the Trust Deed, the Edinburgh Post Office Directory, Oliver and Boyd's Almanac, newspapers and coins. In preparation for the opening of the Cathedral a congregation had been formed to worship in a temporary iron church erected on the site now occupied by the Song School. Beginning on 26 May 1876, it was ministered to by the dean, James Montgomery, and two chaplains, and grew rapidly. The nave of the cathedral was opened on 25 January 1879 and from that day, daily services have been held in the cathedral. The twin spires at the west end, known as "Barbara" and "Mary" after the Walker sisters, were not begun until 1913 and completed in 1917. The architect for these was Charles Marriott Oldrid Scott, Sir George's grandson. The builder was Edwin C. Morgan.

The reredos is designed by John Oldrid Scott and sculpted by Mary Grant. The critic Sacheverell Sitwell condemned the design as "peerless for ugliness, unless it be for its own sister, Scott's chapel of St John's, at Cambridge".

St Mary's Cathedral is the only cathedral in Scotland to maintain a tradition of daily choral services with choristers drawn from its own choir school. It was the first cathedral in Britain to employ girls in the treble line as well as boys, in 1978 when Dennis Townhill was organist and choir master. In 2005 St Mary's Cathedral became the first cathedral in the Anglican tradition to have a female alto singing in daily services. The Father Henry Willis organ was built in 1879.

St Mary's Music School was founded to educate its choirboys. It continues to educate choristers of the cathedral and is now a separate specialist music school open to all pupils.

There are ten original bells in the central tower of the Cathedral hung for change ringing, with two further bells which have been added recently. They were the gift of the first Dean of St Mary's, James F. Montgomery. The bells were all cast by John Taylor & Co. of Loughborough to weight ratios defined by Lord Grimthorpe who was a leading bell designer of his day. This is one of only a few complete Grimthorpe rings still in existence. The bells were dedicated on 29 October 1879. The tenor bell weighs 41 cwt.

The cathedral hosts a number of classical concerts during the annual Edinburgh Festival Fringe.

Provosts of the cathedral 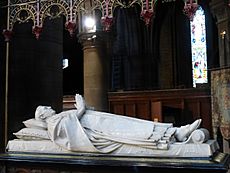 The war memorial is by Pilkington Jackson (1920). 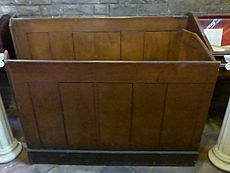 Sir Walter Scott's pew was moved to the Cathedral in 2006. Its first location was in St George's Church on York Place and was then moved in 1932 to St Paul's Church across the road when the two congregations amalgamated, and the latter building became St Paul's and St Georges.

The Cathedral is located between Palmerston Place and Manor Place in the West End of Edinburgh's New Town. "West End - Princes Street" and "Haymarket" are the nearest tram stops served by Edinburgh Trams.

All content from Kiddle encyclopedia articles (including the article images and facts) can be freely used under Attribution-ShareAlike license, unless stated otherwise. Cite this article:
St Mary's Cathedral, Edinburgh (Episcopal) Facts for Kids. Kiddle Encyclopedia.