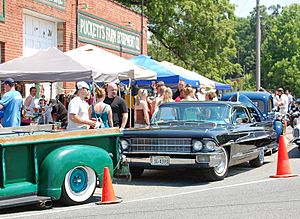 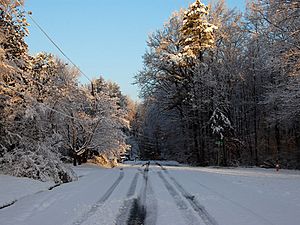 The Derita Community is located several miles north of Charlotte NC's center city, is bordered by I-77 to the west, I-85 to the east, the University area and WT Harris Blvd to the north. Its business district is centered along West Sugar Creek Rd.

Even before the Community became established with stores, a school and churches in 1860, Derita was made up of large family farms carved from the forests and fields where the Sugaree Indians had made flint arrowheads and hunted for wild game. Those early settlers did it all. They raised livestock, sold milk, eggs and cheese. They grew corn, grains, fresh vegetables, cotton and tobacco. Some mined for gold, others for silver. Operators of two local mineral springs supplied bottled water by the wagonload to thirsty Charlotte businesses. On Sundays after Church, folks regularly came from miles around to picnic at Derita Springs and to listen to violin and banjo players perform for an impromptu hoedown. Three months each year (during the farming off-season) residents financed a school for boys known as Derita Academy.

By the early-1950-60's the farms were giving way to rooftops as Charlotte's residential growth exploded and today there are over 60,000 rooftops in the Derita area. Giant corporations like IBM and the (First Union) Wachovia Center looking for room to expand, moved into the Derita area. CMS launched an education experiment here called Governor's Village by clustering schools from Grades 1 - 12. Mecklenburg County purchased huge tracts of woodlands in the Derita area to create 320-acre (1.3 km2) Nevin Community Park and the 192-acre (0.78 km2) RibbonWalk Forest nature preserve. The headquarters for MEDIC, the Mecklenburg EMS Agency, are also located on Statesville Rd.

Derita is ethnically diverse and has a wide variety of housing values from apartments, condos, and townhouses to starter homes, patio homes, second homes, and ranch-style homes on large wooded lots. It is a wonderful mix of older neighborhoods, newer HOA's, and developing neighborhoods --- represented by a strong umbrella Community Organization (DSRCO), now in its 45th year. With a wealth of churches, community youth groups, a bustling YMCA, several large parks, and good schools --- Derita is a great place to live and raise a family.

Information provided by the Derita-Statesville Rd. Community Organization --- based on the writings of local historian Ona Welch Puckett, the Mecklenburg Historical Commission, and published historical tracts from the DSRCO Newsletters.

All content from Kiddle encyclopedia articles (including the article images and facts) can be freely used under Attribution-ShareAlike license, unless stated otherwise. Cite this article:
Derita (Charlotte neighborhood) Facts for Kids. Kiddle Encyclopedia.