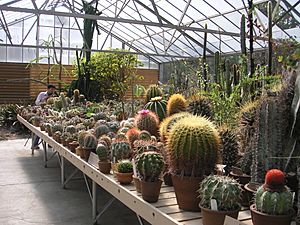 There are an estimated 10,000 succulents worldwide, about 1,500 of them classified as cacti. The Huntington Desert Garden Conservatory now contains more than 2,200 accessions, representing more than 43 plant families, 1,261 different species and subspecies, and 246 genera. The plant collection contains examples from the world's major desert regions, including the southern United States, Argentina, Bolivia, Chile, Brazil, Canary Islands, Madagascar, Malawi, Mexico and South Africa. The Desert Collection plays a critical role as a repository of biodiversity, in addition to serving as an outreach and education center.

Propagation program to save rare and endangered plants

Some studies estimate that as many as two-thirds of the world’s flora and fauna may become extinct during the course of the 21st century, the result of global warming and encroaching development. Scientists alarmed by these prospects are working diligently to propagate plants outside their natural habitats, in protected areas. Ex-situ cultivation, as this practice is known, can serve as a stopgap for plants that will otherwise be lost to the world as their habitats disappear. To this end, The Huntington has a program to protect and plant propagate endangered plant species, designated International Succulent Introductions (ISI).

The aim of the ISI program is to propagate and distribute new or rare succulents to collectors, nurseries and institutions to further research and appreciation of these remarkable plants. The ISI distributes as many as 40 new succulent varieties every year. Field-collected plants, cuttings or seeds are not sold, only seedlings, grafts and rooted cuttings produced under nursery conditions without detriment to wild populations.

The Schick hybrids are derived primarily from crosses of Harry Johnson’s Paramount hybrids, created in the 1930s and 40s, and from successive crosses of their progeny. Like the Paramount hybrids, the Schick hybrids can flower several times in a season and, with increasing age, can produce greater numbers of flowers. Under the Huntington’s growing conditions the first flush of flowers is typically in April with successive flushes occurring in May, June and July, and, in some hybrids, even into August, September and October. These horticultural-significant cultivars are also available through The Huntington’s ISI program.

Plants in the Desert Garden Conservatory

All content from Kiddle encyclopedia articles (including the article images and facts) can be freely used under Attribution-ShareAlike license, unless stated otherwise. Cite this article:
Desert Garden Conservatory Facts for Kids. Kiddle Encyclopedia.