Aralia spinosa, commonly known as devil's walking stick, is a woody species of plant in the genus Aralia, family Araliaceae, native to eastern North America. The various names refer to the viciously sharp, spiny stems, petioles, and even leaf midribs. It has also been known as Angelica-tree.

Aralia spinosa is occasionally cultivated for its exotic, tropical appearance, having large lacy compound leaves. It is closely related to the Asian species Aralia elata, a more commonly cultivated species with which it is easily confused.

Aralia spinosa is an aromatic spiny deciduous shrub or small tree growing 2–8 m (6.6–26.2 ft) tall, with a simple or occasionally branched stem with very large bipinnate leaves 70–120 cm (28–47 in) long. The trunks are up to 15–20 cm (5.9–7.9 in) in diameter, with the plants umbrella-like in habit with open crowns. The young stems are stout and thickly covered with sharp spines. The plants generally grow in clusters of branchless trunks, although stout wide-spreading branches are occasionally produced.

The doubly or triply compound leaves are the largest of any temperate tree in the continental United States, often about a meter (three feet) long and 60 cm (two feet) wide, with leaflets about 5–8 cm (2.0–3.1 in) long. The petioles are prickly, with swollen bases. In the autumn the leaves turn to a peculiar bronze red touched with yellow which makes the tree conspicuous and attractive.

The habit of growth and general appearance of Aralia spinosa and related tree-forming Aralia species are unique. It is usually found as a group of unbranched stems, rising to the height of 3.5–6 m (11–20 ft), which bear upon their summits a crowded cluster of doubly or triply compound leaves, thus giving to each stem a certain tropical palm-like appearance. In the south it is said to reach the height of 15 m (49 ft), still retaining its palm-like aspect. However, further north, the slender, swaying, palm-like appearance is most characteristic of younger plants that have not been damaged by winter storms. 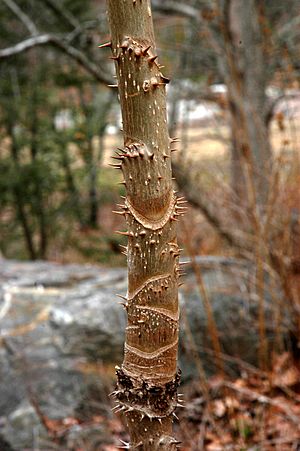 The trunk, showing the bark, leaf scars, and spines.

Aralia spinosa is widespread in the eastern United States, ranging from New York to Florida along the Atlantic coast, and westward to Ohio, Illinois, and Texas. It prefers a deep moist soil. The plants typically grow in the forest understory or at the edges of forests, often forming clonal thickets by sprouting from the roots.

This tree was admired by the Iroquois because of its usefulness, and for its rarity. The Iroquois would take the saplings of the tree and plant them near their villages and on islands, so that animals wouldn't eat the valuable fruit. The fruit was used in many of the natives' foods. The women would take the flowers and put them in their hair because of the lemony smell. The flowers could also be traded for money.

In the past, botanists attributed occurrences of Aralia north of Maryland and Delaware in the Middle Atlantic states to introductions of Aralia spinosa from areas to the south. However some of these occurrences are now known to be of Aralia elata (Japanese Angelica-tree), a related Asian species that is invasive in the area. A. spinosa and A. elata are difficult to distinguish in the field, leading to confusion. In at least one locality, in Philadelphia, A. elata is displacing A. spinosa, with as yet unknown impacts on the local ecology.

The young leaves can be eaten if gathered before the prickles harden. They are then chopped finely and cooked as a potherb.

Aralia spinosa was introduced into cultivation in 1688 and is still grown for its decorative foliage, prickly stems, large showy flower panicles [clusters], and distinctive fall color. These plants are slow growing, tough and durable, do well in urban settings, but bear numerous prickles on their stems, petioles, and leaflets. These plants can be propagated from seeds or root cuttings.

Early American settlers used the plant for its alleged properties of curing toothaches.

In a laboratory study, extracts from the plant, used as a medicine during the American Civil War, showed antimicrobial activity against multidrug-resistant bacteria associated with wound infections.

All content from Kiddle encyclopedia articles (including the article images and facts) can be freely used under Attribution-ShareAlike license, unless stated otherwise. Cite this article:
Devil's walking stick Facts for Kids. Kiddle Encyclopedia.