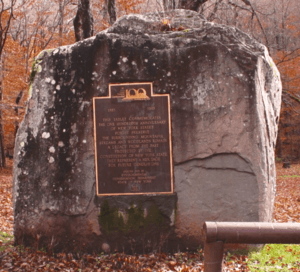 This is the Devil's Tombstone which is from where the park derives its name.

The Devil's Tombstone is one of the oldest parks in the Catskill Forest Preserve.

Origin of the Name

The Devil's Tombstone park is named after a large boulder which was left behind during the Wisconsin glaciation. The rocks resemblance to an old bluestone tombstone lead to its being hoisted into a standing position.

All content from Kiddle encyclopedia articles (including the article images and facts) can be freely used under Attribution-ShareAlike license, unless stated otherwise. Cite this article:
Devils Tombstone Facts for Kids. Kiddle Encyclopedia.