Dichondra repens is a small, prostrate, herbaceous plant native to New Zealand and many parts of Australia. It is occasionally known as kidney weed in Australia and as Mercury Bay weed in New Zealand. Most commonly called dichondra in Australia.

The plant often occurs in forest, woodland, and grassland habitat types. It can also be found in lawns, where it may be deliberately planted or come up as a weed. In California as well as parts of China it has escaped gardens and naturalised in some habitats.

Dichondra repens was originally described by German naturalists Johann Reinhold Forster and Georg Forster, its specific epithet the Latin adjective repens, meaning "creeping". The lectotype was collected by them in New Zealand and is in the Forster collection at Göttingen. In Convolvulaceae, the Morning Glory Family. 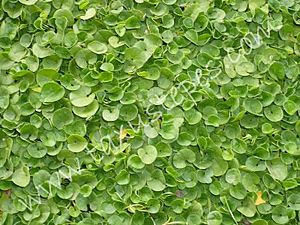 The plant is a perennial herb that has a creeping habit, with roots forming at the nodes. The leaves are kidney-shaped to circular and measure 0.5 to 2.5 cm (0.2–1 in) long. The base of the leaf is heart-shaped (cordate) and its apex emarginated or rounded. The upper and undersurface of the leaf are covered in fine hair. The tiny yellowish-green flowers can appear at any time of the year, more profusely from September to February and most so in November. The fruit is a hairy, two-lobed capsule.

Dichondra repens occurs in South Africa. It is found in all mainland Australian states and Tasmania. Within New South Wales it is widespread across eastern and central parts of the state.

This species is cultivated as an ornamental plant, and can be used as a lawn substitute or groundcover in gardens. It comes in shades of green through to grey.

All content from Kiddle encyclopedia articles (including the article images and facts) can be freely used under Attribution-ShareAlike license, unless stated otherwise. Cite this article:
Dichondra repens Facts for Kids. Kiddle Encyclopedia.