Different artificial sweeteners are used instead of sugar to give diet soda a sweet taste and some are often used combined with one another. 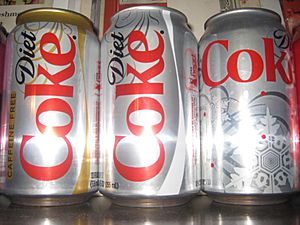 Diet Coke is the number one selling diet soda in the world.

Aspartame, commonly known by the brand name NutraSweet, is one of the most commonly used artificial sweeteners. When aspartame-sweetened Diet Coke was released in 1982 it make aspartame more popular. Today, at least in the United States, when the word "diet" is seen or heard it is assumed to be aspartame.

The first artificial sweeteners used in diet soda were cyclamates (often synergistically with saccharin). While many say these cyclamate-sweetened soda had a better taste than the diet soda that came after them, in 1970 the Food and Drug Administration banned cyclamates in the United States because there was proof that they caused cancer in lab rats. Cyclamates are still used in many countries around the world, including for diet soda.

Once cyclamates were banned, American producers turned to saccharin. Saccharin alone was often criticized for having a bitter taste and "chemical" aftertaste. Some manufacturers, such as Coca-Cola with Tab, attempted to rectify this by adding a small amount of sugar. In 1977, the FDA was petitioned to ban saccharin, too, as a carcinogen, but a moratorium was placed on the ban until studies were conducted. The ban was lifted in 1991, but by that time, virtually all diet soda production had shifted to using aspartame. Perhaps the most notable holdout is Tab, which nevertheless also uses some aspartame in its formula.

Recently two other sweeteners, sucralose (marketed as Splenda) and acesulfame potassium ("Sunett" or "Ace K" (the K is the chemical symbol for potassium) which is usually used in conjunction with aspartame, sucralose, or saccharin rather than alone) have come into growing use, particularly by smaller beverage producers (e.g. Big Red). Diet Rite is the non-aspartame diet soda brand with the highest sales today; it uses a combination of sucralose and acesulfame potassium.

Advocates say drinks employing these sweeteners have a more natural sugar-like taste than those made just with aspartame, and do not have a strong aftertaste. The newer aspartame-free drinks can also be safely consumed by phenylketonurics, because they do not contain phenylalanine. Critics say the taste is not better, merely different, or note that the long-term health risks of all or certain artificial sweeteners is unclear.

The widespread, though not universal, agreement that the newest formulations taste much more "normal" (sugar-like) than the older diet sodas have prompted some producers, such as Jones Soda, to abandon the "diet" label entirely in favor of "sugar-free soda," implying that the taste is good enough to drink the soda even when not trying to lose weight. (This idea was first floated by Diet Coke in 1984, with the tagline, "Just For the Taste of It.")

The beginning of the diet soda or refreshment era was in 1952, when Kirsch Bottling in Brooklyn, New York launched a sugar free ginger ale called No-Cal. It was designed for diabetics, not dieters, and distribution remained local. Royal Crown Cola placed an announcement in an Atlanta newspaper in 1958 announcing a diet soda product, Diet Rite. In 1962, Dr Pepper released a diet(etic) version of its soda, although it sold slowly due to the misconception that it was meant solely for diabetic consumption. In 1963, the Coca-Cola Company joined the diet soda market with Tab, which proved to be a huge success. Tab was originally sweetened with cyclamates and saccharin.

Tab, Diet Rite, and Fresca (a grapefruit-flavored soda introduced by Coca-Cola) were the only brand-name diet refreshments on the market until Pepsi released Diet Pepsi in the 1960s (initially as Patio Diet Cola). Diet 7 Up was also released in 1963 under the name Like. It was discontinued in 1969 due to the US government ban of cyclamate sweetener. After reformulation, it was reintroduced as Diet 7 Up in 1970. It was renamed Sugar Free 7 Up in 1973 then back to Diet 7 Up in 1979. Coca-Cola countered by releasing Diet Coke in 1982. After the release of Diet Coke, Tab took a backseat on the Coca-Cola production lines; Diet Coke could be more easily identified by consumers as associated with Coca-Cola than Tab. Additionally, a study was released claiming that saccharin was a possible carcinogen, leading to Coca-Cola's decision to decrease production of Tab. Prompted by the rising popularity of soft drinks, in the mid-1980s some of those in the alcohol industry began to follow their lead with some beer companies putting sugar-free beer on the market.

By the early 1990s, a wide array of different companies had their own diet refreshments on supermarket shelves. Tab made a comeback during the late 1990s, after new studies demonstrated that saccharin is not an important factor in the risk of cancer. Nevertheless, the Coca-Cola Company has maintained its 1984 reformulation, replacing some of the saccharin in Tab with NutraSweet.

By 2002, some soda companies had diversified to include such flavors as vanilla and lemon among their products, and diet sodas were soon being produced with those flavors as well (see Diet Vanilla Coke, Diet Pepsi Vanilla). By 2004, several alcohol companies had released sugar-free or "diet" alcoholic products too.

There are possible health concerns of sugar substitutes and caffeine overuse. Also, the effectiveness of diet soda as a weight loss tool should also be considered.

Changing the food energy intake from one food will not necessarily change a person's overall food energy intake, or cause a person to lose weight. One study, at the University of Texas Health Science Center at San Antonio, reported by Sharon Fowler at the ADA annual meeting, actually suggested the opposite, where consumption of diet soda was correlated with weight gain. While Fowler did suggest that the undelivered expected calories from diet soda may stimulate the appetite, the correlation does not prove that consumption of diet soda caused the weight gain. The ADA has yet to issue an updated policy concerning diet soda.

An independent study by researchers with the Framingham Heart Study in Massachusetts, has turned up results which indicate that the consumption of diet soda correlates with increased metabolic syndrome. Of the 9,000 males and females studied, findings stated that 48% of the subjects were at higher risk for weight gain and elevated blood sugar. The researchers also acknowledged that diet soda drinkers were less likely to consume healthy foods, and that drinking diet soda flavored with artificial sweeteners more than likely increases cravings for sugar flavored sweets.

A preliminary abstract presented by the University of Miami's Hannah Gardener linked daily consumption of diet soda to a 61% higher incidence of "vascular events" such as strokes and heart attacks, although Gardener acknowledged that these results could not be conclusively linked to harmful effects of diet soda itself, and may be the result of other behaviors. The author stated confirmation was required prior to drawing conclusions. These studies were published as abstracts and presented at a conference. These data and conclusions should be considered to be preliminary until published in a peer-reviewed journal

Among individuals who drink several regular sodas per day, diet soda may be a better choice, according to a website on dieting. Studies have also indicated that body mass gain is an unlikely consequence of artificial sweetener consumption.

Animal studies suggest that artificial sweeteners cause body weight gain, theoretically because of a faulty insulin response, at least in cattle and rats. Rats given sweeteners have steadily increased caloric intake, increased body weight, and increased adiposity (fatness). Adding saccharin to the food of calves increases their body weight as well.

In some countries outside the United States and Canada, the term "light" is often used instead of "diet".

In an effort to cash in on the surging popularity of low-carbohydrate diets, in 2004 both Coca-Cola and Pepsico released reduced-calorie versions of their flagship sodas that contain approximately half the sugar of the regular version. The Pepsi variant, Pepsi Edge, is sweetened with sucralose and corn syrup. The sweetening of the Coca-Cola variant, Coca-Cola C2, is a combination of corn syrup, aspartame, acesulfame potassium, and sucralose. Pepsi discontinued Edge in 2005, citing lackluster sales. Coca-Cola soon followed suit.

Half the sugar of a can of regular cola is still more sugar than many people on popular low-carbohydrate diets are permitted to have in a day. It is possible that these sodas are targeted, instead, at so-called "carb-conscious consumers" who are paying attention to, but not trying to drastically reduce, their carbohydrate intake.

All content from Kiddle encyclopedia articles (including the article images and facts) can be freely used under Attribution-ShareAlike license, unless stated otherwise. Cite this article:
Diet soft drink Facts for Kids. Kiddle Encyclopedia.