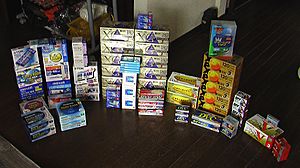 Digital media (compared to analog media) is electronic media that works on digital codes. Today, computing is based on the binary numeral system, so the "digital" refers to the use of "0" and "1" to show data. Computers are machines that use binary digital data as information. Digital media ("Formats for presenting information" according to media) like digital audio, digital video and other digital "content" can be created, referred to and distributed by digital information processing machines. Digital media is a big change from (analog) media.

The transformation of an Analog signal to Digital information by an analog-to-digital converter is called sampling. According to information theory, sampling is a reduction of information. Most digital media are based on turning analog data into digital data and vice-versa (see digital recording, digital video, television versus digital television).

Compared to analog data, digital data is easier to control, and can be made into many copies without losing any quality. Mathematical operations can be made into digital information regardless of its meaning (you can add "2" to the data "65" and view the result either as the hexadecimal number "43" or the letter "C"). Thus, it is possible to use the same compression operation onto a text file or an image file or a sound file.

All content from Kiddle encyclopedia articles (including the article images and facts) can be freely used under Attribution-ShareAlike license, unless stated otherwise. Cite this article:
Digital media Facts for Kids. Kiddle Encyclopedia.