Dilworth Park is a public park and open space along the western side of City Hall in Center City, Philadelphia. The one-half-acre (0.20 ha) park opened to the public on September 4, 2014. 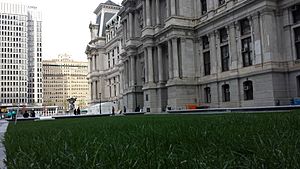 The lawn at Dilworth Park

Dilworth Park opened in September 2014. It is named in honor of Richardson Dilworth, who served as mayor of the city from 1956 to 1962. The current park was designed by KieranTimberlake, Urban Engineers and OLIN and replaced Dilworth Plaza, designed by Vincent Kling in 1972.

Penn planned for Centre Square to be:

a central square or plaza of ten acres to be bordered by the principal public buildings, such as the Quaker meetinghouse, the state house, the market house, and the schoolhouse. Despite the two riverfronts [Delaware and Schuylkill, Penn's city had an inward-facing design, focusing on this central plaza.

However, the Delaware riverfront would remain the de facto economic and social heart of the city for more than a century.

[…] hardly anyone lived west of Fourth Street before 1703. Consequently Penn's design of a center square as the hub of his community had to be abandoned. The large Friends meeting house which was built in 1685 at the midpoint between the rivers was dismantled in 1702. Efforts to develop the Schuylkill waterfront likewise collapsed. Of the merchants, tradesmen, and craftsmen who can be identified as living in Philadelphia around 1690, 123 lived on the Delaware side of town and only 6 on the Schuylkill side. One of the latter, a tailor named William Boulding, complained that he had invested most of his capital in his Schuylkill lot, 'so that he cannot, as others have done, Remove from the same.' Not until the mid-nineteenth century, long after the city had spilled northward and southward in an arc along the Delaware miles beyond its original limits, was the Schuylkill waterfront fully developed. Nor was Centre Square restored as the heart of Philadelphia until the construction of City Hall began in 1871.

All content from Kiddle encyclopedia articles (including the article images and facts) can be freely used under Attribution-ShareAlike license, unless stated otherwise. Cite this article:
Dilworth Park Facts for Kids. Kiddle Encyclopedia.