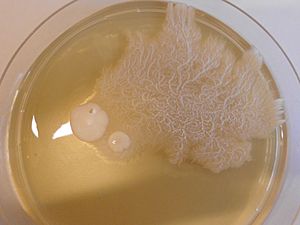 Dimorphic fungi are fungi that can exist in the form of both mold and yeast. This is usually brought about by change in temperature and the fungi are also described as thermally dimorphic fungi. An example is Talaromyces marneffei, a human pathogen that grows as a mold at room temperature, and as a yeast at human body temperature.

Several species of dimorphic fungi are important pathogens of humans and other animals, including Coccidioides immitis, Paracoccidioides brasiliensis, Candida albicans, Blastomyces dermatitidis , Histoplasma capsulatum, Sporothrix schenckii, and Emmonsia sp. Some diseases caused by the fungi are:

Many other fungi, including the plant pathogen Ustilago maydis and the cheesemaker's fungus Geotrichum candidum also have dimorphic life cycles.

All content from Kiddle encyclopedia articles (including the article images and facts) can be freely used under Attribution-ShareAlike license, unless stated otherwise. Cite this article:
Dimorphic fungus Facts for Kids. Kiddle Encyclopedia.