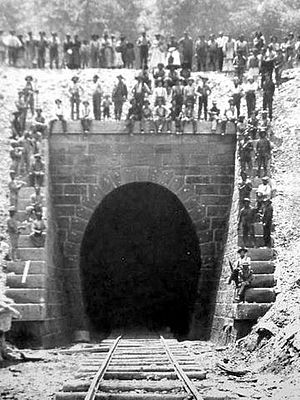 The old Sane Dingess Tunnel as it served the 2 Pole Line of the Norfolk & Western Railway between Lenore and Wayne, WV.

Dingess is known throughout the area for a tunnel on a county road south of the town. Originally built for railroad use, it has been opened to one lane vehicular traffic for many years. 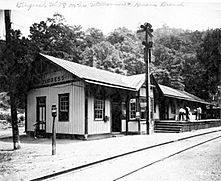 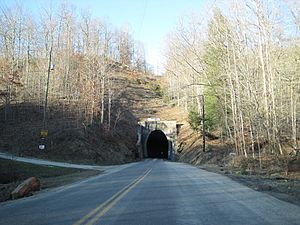 The Dingess Tunnel as it looks today, with paved road and serving single lane traffic. 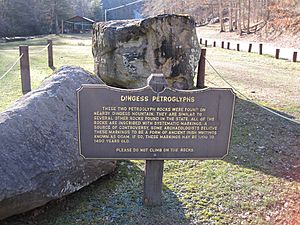 The community was named after William Dingess, a pioneer settler.

The community once garnered a reputation for being a lawless land. In his book They’ll Cut Off Your Project, Huey Perry, wrote “Old-timers there said it was common practice to have a killing once a month. As ‘Uncle’ Jim Marcum described it, ‘Why, a colored person couldn’t think about riding through Dingess. They would stop the train, take him off and shoot him, and nobody would say a word. Why, they would even stop the train and take all its cargo. It was a wild country then, and it ain’t much better now.’”

From 1900 to 1972, approximately seventeen lawmen were shot to death in the area which stretches fifteen miles along Twelve Pole Creek.

IN 1901, robbers raided the community, dynamiting a large safe. According to a November 23, 1901, edition of the Bluefield Daily Telegraph: "Citizens were on the scene almost immediately after the heavy report, and the burglars hadn’t time to gather up their booty as a number of citizens opened fire and probably forty shots were exchanged. The burglars, who secured a lot of valuable jewelry, escaped on a hand car which was recovered later four miles from Dingess, and on which blood spots were plainly visible.

All content from Kiddle encyclopedia articles (including the article images and facts) can be freely used under Attribution-ShareAlike license, unless stated otherwise. Cite this article:
Dingess, West Virginia Facts for Kids. Kiddle Encyclopedia.