Dipodium roseum, commonly known as rosy hyacinth-orchid or pink hyacinth-orchid, is a leafless saprophytic orchid found in east and south-eastern Australia. In summer it produces a tall flowering stem with up to fifty pale pink flowers with small, dark red spots. A widespread and common species it is often confused with D. punctatum but has darker, less heavily spotted flowers. 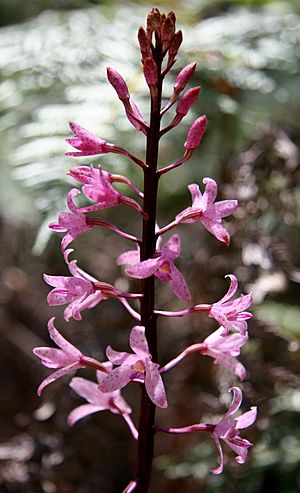 Dipodium roseum was first formally described in 1991 by David Jones and Mark Clements and the description was published in Australian Orchid Research. The type specimen was collected in Montrose in Victoria's Dandenong Ranges. The specific epithet (roseum) is a Latin word meaning "rose-coloured", referring to the colour of the flowers of this orchid. The species was previously included in a wider circumscription of Dipodium punctatum.

The rosy hyacinth orchid grows in a range of habitats from dry woodland to wet forests. It occurs in Queensland south from Gympie, on the coast and ranges of New South Wales and the Australian Capital Territory and in most of Australia where it is the most common Dipodium. It is also found in the south-east of South Australia and is the only member of the genus to occur in Tasmania.

Pollination of this species, as for all species in the genus, is by native bees and wasps.

No leafless species of Dipodium has been sustained in cultivation due to the inability to replicate its association with mycorrhizal fungi in a horticultural context.

All content from Kiddle encyclopedia articles (including the article images and facts) can be freely used under Attribution-ShareAlike license, unless stated otherwise. Cite this article:
Dipodium roseum Facts for Kids. Kiddle Encyclopedia.