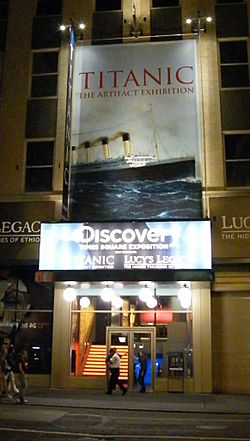 Operated by Discovery Communications and Running Subway Productions, it was located in Times Square in the basement in the former printing plant area of The Times Square Building (the former New York Times Building). Its goal was "to create a home for traveling exhibitions that local museums might find either too large, too expensive, too nondisciplinary or too commercial for their nonprofit attention."

The President of Discovery Times Square was James Sanna and the museum's director was Jim Arnemann. Discovery closed without public notice in September 2016.

All content from Kiddle encyclopedia articles (including the article images and facts) can be freely used under Attribution-ShareAlike license, unless stated otherwise. Cite this article:
Discovery Times Square Facts for Kids. Kiddle Encyclopedia.