Disney's Grand Californian Hotel & Spa (also known as the Grand Californian) is a hotel located at the Disneyland Resort in Anaheim, California. The hotel was constructed as part of a major expansion of the Disneyland Resort in 2001. It was built by The Walt Disney Company and has been operated by The Walt Disney Company since its inception. This luxury hotel is designed to celebrate the early 20th Century Arts and Crafts era, showcasing the once-dominant architectural style of California. It also features a Disney Vacation Club wing that opened in September 2009. The hotel has a private entrance to Disney California Adventure Park. In 2017, Disney completely remodeled the rooms, along with the lobby.

Designed by architect Peter Dominick of 4240 Architecture Inc. (formerly part of Urban Design Group Inc.), it is based on the Arts and Crafts movement of the early 1900s. The hotel has 948 rooms, in addition to 44 suites and 71 villas. 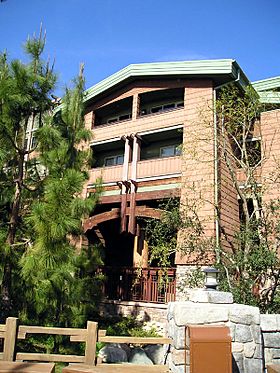 Arts & Crafts architecture of the hotel

Craftsman homes often have a garden theme. For the Grand Californian, the theme was taken from a garden idea and scaled up so that the garden became a forest. The reception hall is based on the interior of the Swedenborgian Church in San Francisco, increased in scale to accommodate the large reception desk. The central lobby is a living room done in immense scale with a massive fireplace and vast arching beams overhead, and furnished with chairs and sofas arranged around small coffee tables. 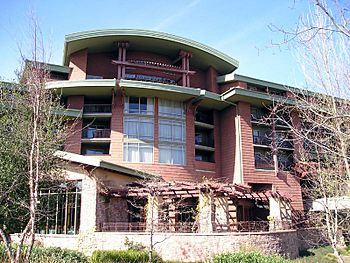 Many of the items found throughout the hotel have been handcrafted by modern practitioners of the Arts and Crafts movement using traditional techniques. Some early Roycroft items are on display in the lobby.

Some of the hotel's rooms are tributes to various Craftsman-era architects and designers. For instance, two of the guest suites, as well as the California Boardroom, pay homage to Frank Lloyd Wright; the Napa Rose restaurant features a rose motif in the glass design which was inspired by Charles Rennie MacKintosh. The Storytellers Cafe features a large tile mural that is a reproduction of an original design by the Gladding, McBean Company for a Robin Hood Room in the Wilmington, California, public library.

Its name is based on Disney's Grand Floridian Resort & Spa, its sister resort and Walt Disney World's flagship resort hotel. The two hotels do not share themes, though, as the Grand Californian is a Craftsman theme, while the Grand Floridian is of a Victorian theme. It does, however, share many thematic elements with Disney's Wilderness Lodge (also designed by Dominick) with its national park lodge theming at Walt Disney World.

The hotel has an entrance to Disney California Adventure park, located at the Grizzly Peak area.

The hotel opened on January 2, 2001. At about 3:00 am on December 28, 2005, a Christmas tree in the main lobby caught fire after electric maintenance workers replaced lights on the tree. All 2,300 guests at the hotel were evacuated within four minutes. The fire was contained by the hotel's sprinkler system and by the Anaheim Fire Department. Two guests were treated for minor injuries, one of which was a severe headache. Guests were returned to their rooms by 7:00 am; some were sent to other hotels in the area.

In response to a growing demand for guest accommodations in Anaheim, the Disneyland Resort announced on September 18, 2007 an expansion of Disney's Grand Californian Hotel & Spa that would increase accommodations by more than 30 percent and include the first Disney Vacation Club villas in Anaheim. The 2.5-acre (10,000 m2) expansion on the hotel's south side added more than 200 new hotel rooms and 50 two-bedroom equivalent vacation villas and marked the West Coast debut of Disney Vacation Club, Disney's vacation-ownership program. During this expansion and renovation, a new swimming pool was added as well as a 300 space underground parking garage. Peter Dominick of 4240 Architecture Inc., architect for the original Disney's Grand Californian Hotel & Spa designed the ambitious expansion to complement his existing hotel. It reflects the same California Arts & Crafts architecture of the existing hotel, which immerses guests in a turn-of-the-20th-century California experience. The project was completed in September 2009.

With the completion of this major expansion, Disney's Grand Californian Hotel & Spa became the third largest hotel in Orange County, up from its previous fourth place standing. 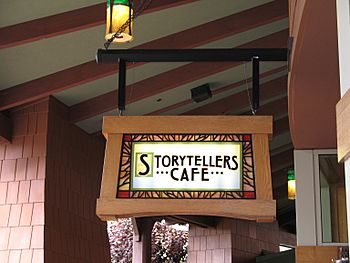 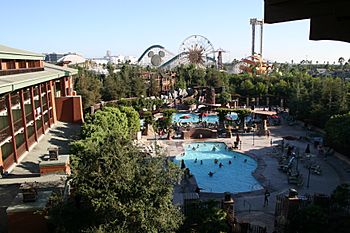 The Disney Vacation Club villas, added as part of the hotel's expansion, include kitchens, living and dining areas and other home-like amenities. The guest rooms feature the same decor as the hotel rooms in the original structure and continue the Californian Craftsman motif.

Napa Rose is a restaurant in Disney's Grand Californian Hotel & Spa at the Disneyland Resort in Anaheim, California, United States, that opened in 2001 as part of Disney's expansion of its Anaheim property from one theme park (Disneyland) into a multi-park resort complex. It specializes in California cuisine and has a Napa Valley wine theme. The restaurant's design is inspired by Scottish art nouveau designer Charles Rennie Mackintosh.

Napa Rose's head chef, Andrew Sutton, formerly of the Rosewood Mansion on Turtle Creek's restaurant in Dallas, was hired from Auberge du Soleil in Napa Valley, and former general manager and sommelier Michael Jordan was hired from the Patina Restaurant Group. Disney hired Sutton and Jordan in order to raise the credibility of its food and wine program. The restaurant has won multiple awards.