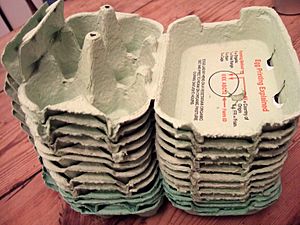 A disposable (also called disposable product) is a product designed to be used only once, and then it would be recycled or is thrown away as solid waste. The word often implies cheapness and short-term convenience instead of something that will last for a long time. The term is also sometimes used for products that may last several months (e.g. disposable air filters) to distinguish from similar things that last forever (e.g. washable air filters).

"Disposable" is an adjective meaning "something not reuseable but is disposed of after use". Many people now use the word as a noun or substantive (i.e. "a disposable") but it is still an adjective. This is because the noun (product, nappy, etc.) is implied.

All content from Kiddle encyclopedia articles (including the article images and facts) can be freely used under Attribution-ShareAlike license, unless stated otherwise. Cite this article:
Disposable product Facts for Kids. Kiddle Encyclopedia.