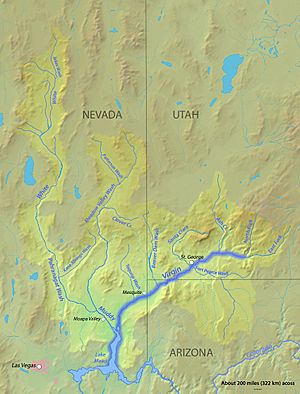 The southwestern Utah area is in the Colorado River Basin.

Utah's Dixie is the nickname for the populated, lower-elevation area of south-central Washington County in the southwestern portion of the U.S. state of Utah. Its climate is very mild when compared to the rest of Utah, and typical of the Mojave Desert, in which it lies.

Situated south of the Black Ridge and west of the Hurricane Cliffs, at the northeastern edge of the Mojave Desert, it was originally settled by Southern Paiutes. Following the Mexican–American War, it became part of the United States and was inhabited by members of The Church of Jesus Christ of Latter-day Saints in 1854 as part of Brigham Young's efforts to establish an Indian mission in the region. During the later 1850s, the settlers began growing cotton and other temperate cash crops in the area of Santa Clara, Utah. The Paiute population was largely displaced and began to decline due to diseases brought by the new settlers.

All content from Kiddle encyclopedia articles (including the article images and facts) can be freely used under Attribution-ShareAlike license, unless stated otherwise. Cite this article:
Dixie (Utah) Facts for Kids. Kiddle Encyclopedia.