Dixie Valley, Nevada, was a small ranching town in Churchill County, Nevada until the area was acquired in 1995 by the US Navy for the Fallon Range Training Complex (FRTC). The town had no retail businesses, most residents were more than a mile from their nearest neighbor, and a 1-room school (grades 1–8) was the teacher's residence and served as a meeting, dance, & election hall (grades 9–12 were bussed 75 miles to Fallon, Nevada). The abandoned town of Dixie was established at the head of Dixie Valley in 1861 and named by Southern sympathizers. The medium-sized Dixie Valley geothermal power plant (1988, 66 megawatts) employs ~30 people and has 12 production steam wells and ~24 injection wells. 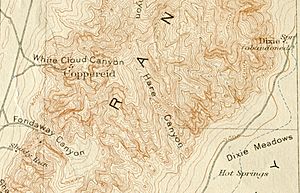 A very large earthquake doublet occurred on December 16, 1954. The Dixie Valley–Fairview earthquakes occurred four minutes apart, each with a maximum Mercalli intensity of X (Extreme). The initial shock measured 7.3 Mw and the second shock measured 6.9 Mw. Damage to man-made structures was minimal because the region was sparsely populated at the time, but oblique-slip motion on a normal fault resulted in the appearance of large fault scarps.

All content from Kiddle encyclopedia articles (including the article images and facts) can be freely used under Attribution-ShareAlike license, unless stated otherwise. Cite this article:
Dixie Valley, Nevada Facts for Kids. Kiddle Encyclopedia.