In biological taxonomy, a domain (also superregnum, superkingdom, or empire) is a taxon in the highest rank of organisms, higher than a kingdom.

Domain (or its synonyms) is the most inclusive of these biological groupings. The arrangement of taxa reflects the fundamental evolutionary differences in the genomes. There are several modern alternative domain classifications of life. Among them are:

After defining Archaea as a new domain, Woese redrew the taxonomic tree. His three-domain system is based upon genetic relationships. It divides life into 23 main divisions in three domains: Bacteria, Archaea, and Eukarya. Archaea are neither bacteria nor eukaryotes. Looked at another way, they are prokaryotes that are not bacteria. 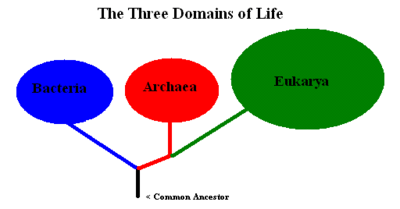 All content from Kiddle encyclopedia articles (including the article images and facts) can be freely used under Attribution-ShareAlike license, unless stated otherwise. Cite this article:
Domain (biology) Facts for Kids. Kiddle Encyclopedia.