The Dominion Astrophysical Observatory, located on Observatory Hill, in Saanich, British Columbia, was completed in 1918 by the Canadian government. The Dominion Architect responsible for the building was Edgar Lewis Horwood. The main instrument is the 72 inch (1.83 meter) aperture Plaskett telescope, proposed and designed by John S. Plaskett in 1910 with the support of the International Union for Cooperation in Solar Research.

The observatory has been designated a National Historic Site of Canada as it is a world-renowned facility where many discoveries about the nature of the Milky Way were made, and it was one of the world’s main astrophysical research centres until the 1960s.

Centre of the Universe

The Centre of the Universe was the public interpretive centre for the observatory that was regularly open to the public between May and September. The centre featured interactive exhibits about astronomy, the work of the observatory and its parent organization, the NRC Herzberg Institute of Astrophysics. There were also tours of the telescope and programs in the planetarium and video theatre. The Centre was closed by the Federal Government in August 2013, claiming financial reasons as the cost. The Friends of the Dominion Astrophysical Observatory Society (FDAO) was formed in 2015 with a goal of reinstating the programs terminated when the Centre of the Universe was closed. In May 2016, the FDAO signed a License to Occupy for the Centre of the Universe with the National Research Council.

The Royal Astronomical Society of Canada, Victoria Centre, which has a long association with the Dominion Astrophysical Observatory and public outreach dating back to 1914, holds free public "Star Parties" at the DAO on select summer Saturday evenings. These events include solar and nighttime viewing with RASC and DAO telescopes, presentations, lectures, and displays. 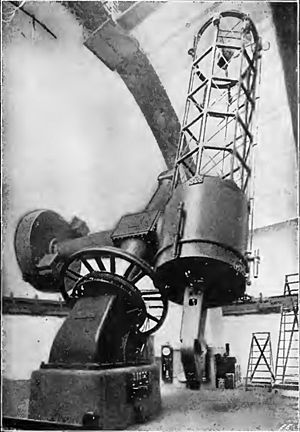 The Plaskett telescope in 1920

The building that houses the telescope was built by McAlpine-Robertson Company of Vancouver for a price of $75,000. Both the building and dome, made by Warner and Swasey Co, are double walled.

The glass mirror, 73 inches in diameter and 12 inches (30 cm) thick, weighs approximately 4340 lb. (1970 kilograms) and was made by the Saint-Gobain company in their Charleroi glass works in Antwerp, Belgium and shipped only a week before the start of World War I. It was then ground in the United States at the John A. Brashear company in Pittsburgh. The mirror had to be reground twice, once due to a mysterious scratch and the second time due to a flaw in the grinding. This added 2 years to the completion time of the telescope, pushing the date back to 1918. The mirror was sent to Victoria by train, which arrived in Victoria 6 days later. The completed mirror was hauled up Little Saanich Mountain by horse and wagon.

Images of the construction are available [1]

Following completion, Plaskett remained the head of the observatory until 1935.

A spectrograph is fitted to the Cassegrain focus and an imaging CCD is attached to the Newtonian focus.

In 1962, a 48" optical telescope was added to the observatory. The telescope, ordered in 1957, was made by Grubb Parsons of Newcastle-upon-Tyne, England. Its Coude focus is used with a room sized spectrograph.

In 1995, the observatory was made the headquarters of the NRC Herzberg Institute of Astrophysics, which operates several Canadian telescopes, both optical and radio. The NRC collaborates with international partners such as the Canada-France-Hawaii Telescope.

The telescopes are in constant use today and are open for visitors year round. An interpretive centre called the Centre of the Universe was opened in 2002 but closed in 2013 due to budgetary reasons.

As of January 2014, the current (acting) director is Dr Dennis R. Crabtree. 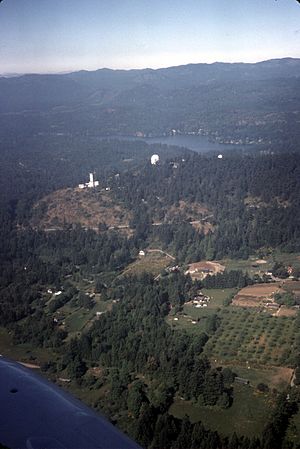 The Plaskett telescope was possibly planned to be the largest telescope in the world but delays meant it was completed and saw "first light" on May 6, 1918, 6 months after the 100-inch Hooker telescope (2.5 m) at Mount Wilson Observatory. However, although the Hooker telescope achieved a first light on November 1, 1917, it was not really opened until 1918, which was also affected by delays especially from WW1. At this point most observatories still had 19th century era refractors of at most 1 to 2 feet in aperture, as a shift to reflectors was still growing.

The Plaskett telescope remained the second largest until the 74 inch (188 cm) reflector at David Dunlap Observatory in 1935 (also in Canada) debuted.

The next largest were the Harvard College Observatory 60 inch and the Mt. Wilson 60-inch Hale.

All content from Kiddle encyclopedia articles (including the article images and facts) can be freely used under Attribution-ShareAlike license, unless stated otherwise. Cite this article:
Dominion Astrophysical Observatory Facts for Kids. Kiddle Encyclopedia.