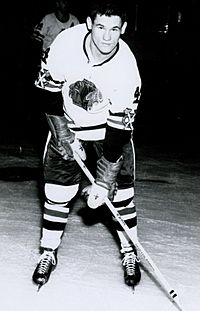 Donald Joseph "Don" Ward (October 19, 1935 – January 6, 2014) was a Canadian professional ice hockey defenceman. He played 34 games in the National Hockey League (NHL) for the Chicago Black Hawks and Boston Bruins in the late 1950s. He was born in Sarnia, Ontario.

Ward died on January 6, 2014 in Shoreline, Washington in the United States. He was 78 years old. He was outlived by his wife and son.

All content from Kiddle encyclopedia articles (including the article images and facts) can be freely used under Attribution-ShareAlike license, unless stated otherwise. Cite this article:
Don Ward (ice hockey) Facts for Kids. Kiddle Encyclopedia.