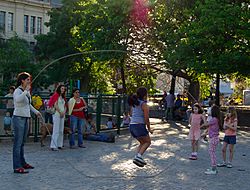 Double Dutch is a game in which two long jump ropes turning in opposite directions are jumped by one or more players jumping simultaneously. It is popular worldwide. Competitions in double Dutch range from block parties to the world level. During the spring of 2009, double Dutch became a varsity sport in New York City public high schools. It has been fancifully debated whether double Dutch came over with the first Dutch settlers or appeared in the first half of the 1900s. 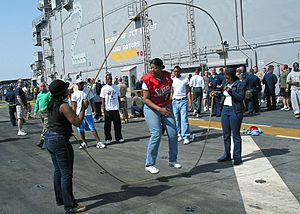 US sailors and marines participate in a double Dutch contest on the deck of the USS Saipan during a ship celebration.

Playing double Dutch involves at least three people: one or more jumping, and two turning the ropes. A jumper usually performs tricks that may involve gymnastics or breakdance, and may also incorporate fancy foot movements.

Double Dutch in the media

The 1981 single "Double Dutch Bus" by Frankie Smith features African American girls playing this game in the video clip of the song.

Doubletime, a documentary from Discovery Films, tells the story of the historic meet-up of rope skipping and double Dutch. The film follows two top teams; the Bouncing Bulldogs and the Double Dutch Forces, as they train to compete against each other for the very first time. The competition takes place at the Apollo Theater in Harlem.

In 2005, Elizabeth Verity, aka Double Dutch Girl, began jumping her way around the U.S. raising money for the United States military. Double Dutch Girl jumped rope in St. Louis, Chicago, Washington and several small towns throughout the Midwest. Ultimately, her goal is to jump rope in all 50 states.

The 2007 Disney Channel original movie Jump In! features double Dutch as the central element of its plot. Jump In! features the Dutch Dragons, based on a real double Dutch team from 1997 in Harlem. Jump!, an award-winning documentary following five teams from around the United States who push their physical and psychological limits in pursuit of winning the World Rope Skipping Championship, also premiered at the Los Angeles Film Festival in 2007 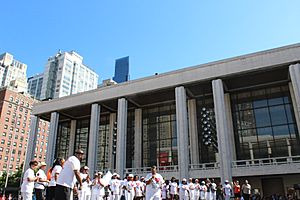 The National Double Dutch League holds yearly camps and a Holiday Classic, in which teams from all over the world compete. Double Dutch is also an integral part of USA Jump Rope Tournaments as well as the AAU Junior Olympic Games and the World Jump Rope Federation's worldwide annual competitions.

The World Jump Rope Championships were held in July, 2012, at George Washington University, in Washington D.C.

All content from Kiddle encyclopedia articles (including the article images and facts) can be freely used under Attribution-ShareAlike license, unless stated otherwise. Cite this article:
Double Dutch (jump rope) Facts for Kids. Kiddle Encyclopedia.