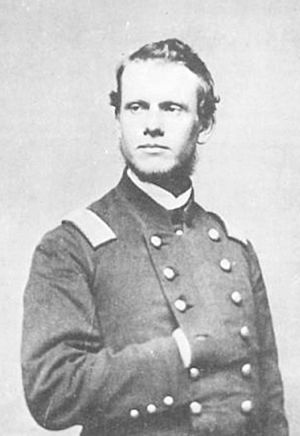 Douglas Hapeman (1839–1905) was a Lieutenant Colonel in the 104th Illinois Infantry during the American Civil War, where he was awarded the Medal of Honor. He was born on January 15, 1839 in Ephratah, New York, and later moved to Illinois. Hapeman was awarded the medal for his actions on July 20, 1864 at the Battle of Peachtree Creek, Georgia. There, he "rallied his men under a severe attack, re-formed the broken ranks, and repulsed the attack," and acted with "conspicuous coolness and bravery." He was awarded his Medal of Honor on April 5, 1898.

All content from Kiddle encyclopedia articles (including the article images and facts) can be freely used under Attribution-ShareAlike license, unless stated otherwise. Cite this article:
Douglas Hapeman Facts for Kids. Kiddle Encyclopedia.