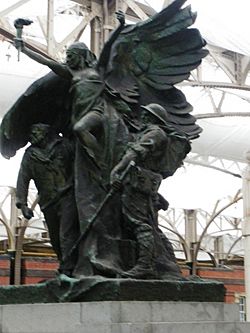 Dover Marine War Memorial stands in the old Dover Marine Station in the Western Docks, Dover, England. The port has effectively been closed for several years; it is currently used as a berthing station for cruise liners, and is only open when a liner is in dock.

The memorial was created in remembrance of South Eastern and Chatham Railway employees who served during World War I. The Railway had 5,222 individuals who served of whom 556 had died,

Standing on a granite plinth is a group of three sturdy figures cast in bronze, a sailor, a soldier, and rising above and between them the winged "Victory", a woman, holding aloft the "torch of truth".

The war memorial was unveiled on 28 October 1922 by R.H Cosmo-Bonsor the Chairman of the South Eastern and Chatham Railway Managing Committee and the sculptor was Mr. W. C. H. King. In his career, Mr. King worked closely with Gilbert Bayes and was the sculptor of the statue of Robert Owen in Newtown, Powys, finished after Bayes had died. King also sculpted the Great War memorial in St Peter’s Church, Wolverhampton, and some statuary in the niches of the tower of All Souls College in Oxford.

All content from Kiddle encyclopedia articles (including the article images and facts) can be freely used under Attribution-ShareAlike license, unless stated otherwise. Cite this article:
Dover Marine War Memorial Facts for Kids. Kiddle Encyclopedia.