Dowlingville is a locality in the Australian state of South Australia located on the east coast of Yorke Peninsula immediately adjoining Gulf St Vincent about 89 kilometres (55 mi)* north-west of the state capital of Adelaide. Its boundaries were created in May 1999. 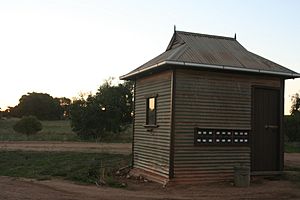 The name of the locality is considered to have been derived from a Mr G.P. Dowling Whittaker who was an early resident. As of 1904, it was described as follows:

This is essentially a farming district, so that it is not surprising to find only a few houses, a store, a post office conducted by Mr. Whittaker, a State school, in charge of Mrs Lewis and a church. Only a few years ago this country was covered with scrub. Industry and manures have transformed the district considerably...

The locality contains the historic former Dowlingville Post Office, which is listed on the South Australian Heritage Register.

As of 2014, the majority land use within the locality is “primary production.” Dowlingville is located within the federal division of Grey, the state electoral district of Goyder and the local government area of the Yorke Peninsula Council.

All content from Kiddle encyclopedia articles (including the article images and facts) can be freely used under Attribution-ShareAlike license, unless stated otherwise. Cite this article:
Dowlingville, South Australia Facts for Kids. Kiddle Encyclopedia.