Price is a locality and township on Yorke Peninsula in South Australia. It is within the Yorke Peninsula Council local government area and is 131 kilometres (81 mi) north west of the centre of state capital, Adelaide.

At the 2006 census, Price and the surrounding district had a population of 256.

The township, which was proclaimed on 3 August 1882, is near the northern boundary of the Hundred of Cunningham.

It was named by Sir William Jervois, Governor of South Australia 1877-83, after his daughter in law, Florence Annie Price, who married John Jervois, his eldest son. She was a daughter of Henry Strong Price, a pioneer pastoralist of the Flinders Ranges.

The principal local industries are grain farming and salt production. In the case of the latter, sea salt is harvested from coastal salt pans.

Tourism facilities are limited to the Wheatsheaf Hotel, established 1886, and a caravan park. 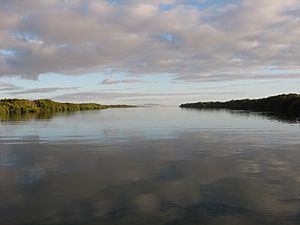 Although not right on the coast, Price has a causeway running to a mangrove-fringed tidal creek, Wills Creek, which connects it with the sea (Gulf St Vincent). At the end of the causeway there is a public boat ramp. Once outside the creek, fishing is plentiful.

Wills Creek is a very sheltered anchorage for boats and, in earlier times, it was from here that bagged salt and grain was loaded onto ketches for export. These products are now transported in bulk form by road. A 1911 newspaper reported that most of the ketches visiting Price via Wills Creek had, on at least one visit, suffered the inconvenience of being stuck in the mud of the creek at low tide.

All content from Kiddle encyclopedia articles (including the article images and facts) can be freely used under Attribution-ShareAlike license, unless stated otherwise. Cite this article:
Price, South Australia Facts for Kids. Kiddle Encyclopedia.