Downtown Athens in Athens, Georgia is generally considered to be the area bounded on the north by Dougherty Street, on the south by Broad Street and the University of Georgia campus, on the west by Pulaski Street, and on the east by Foundry Street.

A Downtown Athens Historic District was listed on the National Register of Historic Places by Austin Kinsey in 1978.

The commercial and governmental heart of the city has traditionally been toward the eastern end of Downtown Athens, between Lumpkin and Thomas Streets. Recent developments, particularly between Lumpkin and Pulaski Streets, have expanded the boundaries of the "central" part of the neighborhood. The term "Downtown Athens" can also mean this smaller, more commercial area, particularly when used in the context of the city's nightlife and restaurants.

Some definitions of "Downtown" include the area west of Pulaski Street, which is a much more residential area characterized by historic homes, new infill construction, and some public housing. This part of Downtown Athens has the highest concentration of hotels particularly along Broad Street. The Prince Avenue commercial corridor is an important center of business, particularly for those living in the Boulevard and Normaltown neighborhoods.

The area has several hotels and apartment buildings, and more high-rise condos are either under construction or planned for the area. Some of these high-rises as well as the construction of the new Multi-Modal Transportation Center have the potential to redefine the area encompassing downtown Athens to stretch east to the banks of the Oconee River. 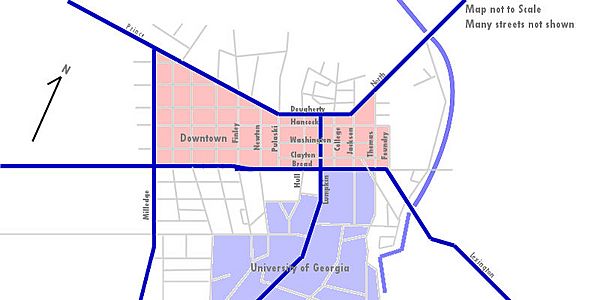 A map of Athens with Downtown and UGA shaded. Note that the common definition of Downtown does not include the area west of Pulaski Street.

The exact delineation of what is "Downtown" differs for varying purposes. Some of the more common ones are:

The Downtown area is the cultural center of the city. Several dozen night clubs host performances of local, regional and national bands and artists. The 40 Watt Club at the corner of Washington and Pulaski and Georgia Theater on Lumpkin Street between Clayton and Washington are among the most well-known night spots where many bands have made the jump to a larger regional stage (See Music of Athens, Georgia). The Classic Center, located on Thomas Street on the eastern edge of the neighborhood, is a multi-purpose facility containing a performing arts center, convention space, and banquet halls. It was a filming site for Blue Collar TV.

All content from Kiddle encyclopedia articles (including the article images and facts) can be freely used under Attribution-ShareAlike license, unless stated otherwise. Cite this article:
Downtown Athens (Georgia) Facts for Kids. Kiddle Encyclopedia.