Downtown New Haven is one of the most residential downtown areas in the United States, with nearly 7,000 inhabitants. The expansion of housing options in recent years has helped support downtown businesses and has brought about a surge in economic activity. Secondary streets and areas at the periphery of the neighborhood that once contained vacant storefronts are now almost entirely leased to restaurants and retailers, and the office vacancy rate has dramatically fallen as well.

Downtown New Haven is divided into several independent sections centered on the New Haven Green. This basic structure is a remnant of the 1638 New Haven Plan. The main campus of Yale University, which is located to the north and east of the Green, is sometimes considered distinct from but intermingled with Downtown. 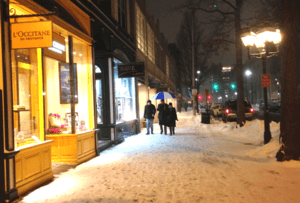 The area bounded by Chapel and Crown Streets is a popular stretch of restaurants, boutiques and bars located across from the Old Campus of Yale University. Includes such historic establishments as Union League Cafe and the c. 1934 Owl Shop cigar lounge. The Anchor Bar, notable for its Art Moderne style and popularity with playwright Thornton Wilder, operated on College Street from the 1940s until 2015.

The area is largely coterminous with the Chapel Street Historic District. Notable buildings include the Hotel Taft and the Chapel Square Mall. The Yale University Art Gallery and Yale Center for British Art are also located here. 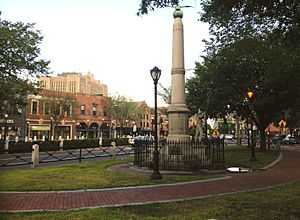 Broadway Triangle, at the center of the Broadway area

The Broadway area is a commercial center that has since the 1990s been bought piece-by-piece by Yale University and redeveloped into The Shops at Yale shopping district. This section was previously notable as home of the Yankee Doodle Coffee Shop and Cutlers Records.

The Ninth Square district, which contains the blocks southeast of the New Haven Green, has experienced a resurgence as a nightlife and arts district since the first decade of the 21st century.

The majority of buildings within these blocks are preserved as the Ninth Square Historic District. 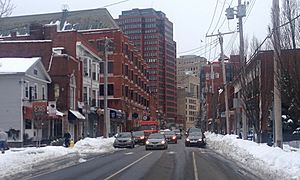 The Whitney Avenue corridor, north of the New Haven Green, contains shops and eateries that are primarily owned by Yale University and cater to its student population. This area serves as a center for New Haven's East Asian community, with several restaurants and grocery stores catering to this population and an annual Chinese New Year festival parading up Whitney Avenue.

Notable sites of the past

All content from Kiddle encyclopedia articles (including the article images and facts) can be freely used under Attribution-ShareAlike license, unless stated otherwise. Cite this article:
Downtown New Haven Facts for Kids. Kiddle Encyclopedia.