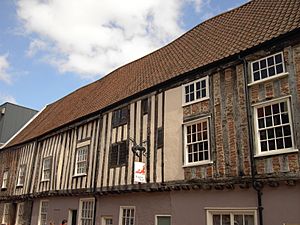 Dragon Hall is a Grade 1 listed medieval merchant's trading hall located in King Street, Norwich, Norfolk close to the River Wensum, and since 2015 home to Writers' Centre Norwich. It is thought to be unique in being the only such trading hall in Northern Europe owned by one man. The building stands close to the River Wensum on King Street, the main road through the city in the fifteenth century, with excellent river transport links via Yarmouth to the Low Countries, Flanders and the Germanic states. Dragon Hall is now acknowledged as one of Norwich’s medieval architectural gems and an iconic building in the city.

The Great Hall on the first floor was built in the 15th century, but some parts of the site are much older. Archaeological research shows evidence of a Saxon hut c. 1000 beneath the Hall. On the northern part of the site, in the late 13th century, the Abbey of Woburn in Bedfordshire had a fish processing operation with various outbuildings and a track to a staithe or quay on the River Wensum. There was also a boundary wall with a large brick arch to give access to King Street. In about 1330 an L-shaped domestic 'hall house' owned by John Page, was built on the southern part of the site with an undercroft and an entrance on the south side from Old Barge Yard.

In about 1427 Robert Toppes, a Norwich merchant, re-developed the site as a commercial complex. He built his first floor trading hall on top of part of the 14th century domestic hall house and on top of the existing boundary wall and brick arch. He retained the 14th century entrance to the hall house for his customers. From the entrance passage his customers went up a new staircase to the first floor trading hall. This was a timber construction of seven bays with a crown post roof, decorated with carvings in the spandrels of 14 dragons. The hall was constructed with English oak, using some 1,000 trees. Clearly Toppes wanted to impress his customers. At the rear of the building he created a yard space with access to the river for his imports and exports, a warehouse area under the hall and a new stairway down to the extended undercroft from the yard. Part of the hall house was retained as a ground floor reception area.

We do not know Robert Toppes’s origins or exactly when he was born but he became a very successful entrepreneur after he acquired the Dragon Hall site in the 1420s. Toppes exported Norfolk worsted cloth and imported fine textiles, ironware, wines and spices.

His wealth allowed him to rise through the civic ranks and he was an important figure in city politics. He became the City Treasurer at the age of 27, the Sheriff three years later and was elected mayor four times and burgess MP for Norwich four times. He was also involved in two major disturbances in the city, one being over a disputed mayoral election after which he was exiled to Bristol for some weeks; the other was the so-called 'Gladman's Insurrection' when he was indicted in the Kings Bench court.

He was married twice and had eight children. His second wife, Joan Knyvett, belonged to an established gentry family in South Norfolk, closely linked to the famous Paston family. He acquired a large portfolio of properties throughout Norfolk and Suffolk, as well as diversifying into money-lending. By 1450 he was one of the richest men in Norwich. Robert Toppes prepared carefully for the afterlife, paying for a great stained-glass window in Norwich’s largest parish church, St. Peter Mancroft; some of the panels can be seen there today. When he died in 1467, in addition to bequests to all city churches, his will stated that Dragon Hall should be sold to pay for priests to pray for his eternal soul.

When the hall was sold off after Toppes’ death in 1467 it was sub-divided into residential units, initially quite large with chimneys and fireplaces. Then gradually it became sub-divided into smaller, crowded tenements and the three large bay windows were replaced with the doors and sash windows we see today. An attic floor and a new ground floor were also inserted and cellars were dug out beneath. Toppes's trading hall was effectively 'lost' and the building was known as the Old Barge Building, after the pub at the southern end. At the rear of the site and in Old Barge Yard a variety of poor and crowded tenements also grew up. The southern end of the hall became The Old Barge pub and by the 19th century some 150 people were living on the site. In 1937 a Slum Clearance programme removed nearly all the tenements at the rear. By the 1950s at the northern end of the main hall building on the street side there was a butcher's shop; in the central section was a rectory; and at the southern end was the Old Barge pub. In 1954 it was given Listed Building status: Grade 1.

Following deeper examination by the Norwich Survey, based at UEA, architectural historians and other interested people realised that the building was of great historical importance and a committee was set up to restore the hall. In 1979 the City Council bought the building which was by then uninhabited and a major programme of fund raising, restoration and research began. The Norfolk and Norwich Heritage Trust was formed to run the hall; partition walls, attic floors, chimneys and fireplaces were removed and the hall was restored to something like its original state. In 1986 it was renamed as 'Dragon Hall' and became a heritage attraction, a resource for the local community and an educational centre. In 1997/98 there was a major archaeological investigation of the area behind the Hall. Following a major Heritage Lottery Fund grant in 2005/06, further improvements were made, including the addition of a north wing with displays, a lift, offices, a kitchen and a meeting room and it became a venue for weddings, celebrations, business functions and arts performances, open to the public for four days a week.

In 2015 the lease of the premises was taken over by Writers’ Centre Norwich and in 2016 the Norfolk and Norwich Heritage Trust was wound up. The Dragon Hall Volunteers were re-constituted as the Dragon Hall Heritage Volunteers and they continue to act as tour guides, to give external talks to local clubs and societies and to act as guardians and promoters of the heritage of Dragon Hall by the creation of an on-line archive of documents and photographs. They also have a Local History Study Group and a Mummers group.

Details of the Heritage Volunteers, of talks, films, fuller guides to Dragon Hall and of a variety of available documents, can be accessed at http://www.dragonhallnorwich.org.uk/

Tours of Dragon Hall are normally available once a month. In addition, on the Heritage Open Days in September each year additional tours are available. Details can be seen on the Writers’ Centre Norwich website http://www.writerscentrenorwich.org.uk/

All content from Kiddle encyclopedia articles (including the article images and facts) can be freely used under Attribution-ShareAlike license, unless stated otherwise. Cite this article:
Dragon Hall, Norwich Facts for Kids. Kiddle Encyclopedia.