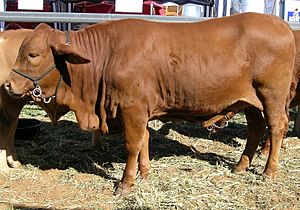 The Droughtmaster is a tropical breed of beef cattle developed in North Queensland, Australia by several cattlemen from crossing Brahman and British breed cattle, principally the Beef Shorthorn during the early 1900s.

The breed was conceived in response to the need in the Australian Tropics for a breed of cattle which had good tick resistance and would be able to use the environment and the pastures in the most efficient manner to give higher weight gains and fertility.

The Droughtmaster breed emerged after many years of crossbreeding and meticulous selection for the following properties:

Other British breeds — mainly Hereford — have since been used in its development to arrive at a fixed tropical breed of approximately 50% Bos indicus and 50% Bos taurus genetics. Droughtmasters are medium to large with good walking and foraging abilities coupled with lower nutritional requirements to give them the ability to retain condition and keep breeding, irrespective of the prevailing conditions. Their short coat is generally red in colour, although variations from golden honey to dark red can occur. The red pigmentation in Droughtmasters helps protect the cattle from cancer eye, sunburnt udders and photosensitisation. The cattle may be polled or horned, but the vast majority are polled and exhibit only a moderate hump. They have medium to large ears and an extended dewlap.

In pasture and feedlot trials these cattle have shown good average daily weight gains when compared to other breeds. Large commercial Droughtmaster herds are running on native pastures in both Queensland and the Northern Territory and they are rapidly gaining prominence in the traditional "British-bred" areas in southern Australia.

Since the 1970s Droughtmaster cattle, semen and embryos have been exported to countries throughout Asia, Africa, Latin America, South America, the Middle East and the Pacific Islands.

All content from Kiddle encyclopedia articles (including the article images and facts) can be freely used under Attribution-ShareAlike license, unless stated otherwise. Cite this article:
Droughtmaster Facts for Kids. Kiddle Encyclopedia.