For the seat in the New South Wales Legislative Assembly, see Electoral district of Drummoyne.

Drummoyne is a suburb in the Inner West of Sydney, in the state of New South Wales, Australia. Drummoyne is 6 kilometres north-west of the Sydney central business district and is the administrative centre for the local government area of the City of Canada Bay.

Drummoyne sits on the peninsula between Iron Cove and Five Dock Bay. It is surrounded on three sides by Sydney Harbour and the Parramatta River and, as such, has some of Sydney's best waterfront views. Drummoyne neighbours the similarly historic Five Dock and Abbotsford.

William Wright, a merchant, whaler and sealer bought land in the northern part of the area in 1853. The property was bounded by present-day Lyons Road and Victoria Road. Drummoyne House was built in the Georgian Classical style. It was rectangular in plan with a hipped roof with a concave verandah across the entire front and returned along each side. He named it Drummoyne Park after his family home at Drummoyne on Clyde in Scotland. In Gaelic, Drummoyne means flat topped ridge. 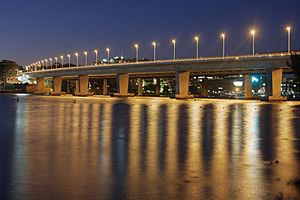 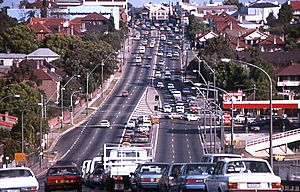 Drummoyne is linked to Rozelle by the Victoria Road and Huntleys Point by the Gladesville Bridge. Victoria Road, one of Sydney's busiest roads, cuts through the heart of Drummoyne en route to the Sydney CBD. Victoria Road's presence makes the CBD transport hub extremely accessible, as numerous and frequent bus routes from Sydney's west merge in Drummoyne. However, it also leads to a bottleneck during the morning and evening peaks.

Drummoyne's population is wealthier than the Australian average, with a median weekly household income of $2,148, compared with $1,234 in Australia. The most common types of occupation for employed persons were Professionals (36.1%), Managers (22.2%), and Clerical and Administrative Workers (14.7%). 65.1% of the suburbs occupied private dwellings were family households, 28.7% were lone person households and 6.2% were group households.

All content from Kiddle encyclopedia articles (including the article images and facts) can be freely used under Attribution-ShareAlike license, unless stated otherwise. Cite this article:
Drummoyne, New South Wales Facts for Kids. Kiddle Encyclopedia.