Some of Dublin's newest landmarks, Convention Centre Dublin and the Samuel Beckett Bridge, located in the regenerated Dublin Docklands (28 June 2014)

Dublin Docklands (Irish: Ceantar Dugaí Átha Cliath) is an area of the city of Dublin, Ireland, on both sides of the River Liffey, roughly from Talbot Memorial Bridge eastwards to the 3Arena.

The Docklands has over recent years been regenerated as an extension of the modern business hub of Dublin's International Financial Services Centre. By 2008 the area had over 600 enterprises with new companies moving in every month, however this slowed down considerably due to the Irish financial crisis. Values and development activity has since 2014 made a significant recovery. The urban regeneration has transformed the Docklands into an innovative built environment and a uniquely modern area in which to do business.

New infrastructure, such as the Samuel Beckett Bridge and the LUAS Docklands extension, has made the area more accessible. New venues, including the Bord Gais Energy Theatre, the refurbished 3Arena and the Convention Centre Dublin have all become modern Dublin landmarks. Despite the scaling down of projects due to the economic recession, in tandem with the presence of national and international leaders in the finance, legal, and particularly digital and communications sectors (see Silicon Docks), the Docklands has become a vibrant working and living district in the city of Dublin.

A view of the 3Arena (formerly The O2) in Dublin's regenerated Docklands, from across the Liffey at the opening to the Grand Canal. 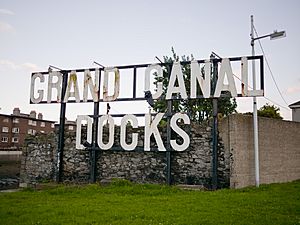 The rusting Grand Canal Docks sign at the opening to the Grand Canal. 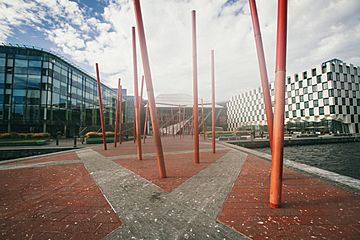 A view of Grand Canal Square in Dublin's regenerated Docklands. The Bord Gais Energy Theatre is in the centre, Accenture's Global Head Office is on the left and The Marker Hotel on the right.

DART (Dublin Area Rapid Transport) rail service has four local Dockland stations. Connolly Station north of the River Liffey and Tara Street Station south of the River are within five minutes' walk of the International Financial Services Centre (IFSC) in Docklands. At peak times, the DART runs every 10 minutes. Pearse Street Station and Grand Canal Dock Station service the remainder of South Docklands and are adjacent to or within minutes walking distance to some the Docklands largest companies including Google and Accenture.

An extension of the Luas, Dublin’s tram service, runs from the city centre along Mayor Street right into the heart of north side Docklands. It has Docklands stops at Georges Dock, Mayor Square, Spencer Dock and terminates at the Point adjacent to the 3Arena and the Gibson Hotel. At peak times the Docklands Luas extension runs every four minutes.

Iarnród Éireann opened a train station in the area in 2007. The Docklands railway station commenced service on 12 March 2007, and serves the Maynooth commuter rail line (except Drumcondra station) as far as the M3 Parkway.

There are numerous hotels in the Dublin Docklands area located on both sides of the river. The Gibson Hotel (4 star) is the closest hotel to the 3Arena concert venue, while the Clarion Hotel IFSC (4 star) and Jury’s Inn Custom House (3 star) are both close to the Convention Centre Dublin. 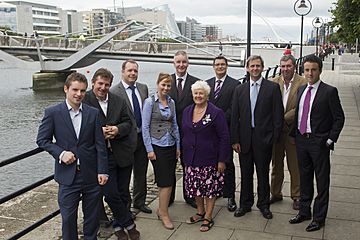 The Docklands Business Forum is the business association for the Dublin Docklands and is recognised as the primary business organisation by the Dublin Docklands Area Master Plan 2008. With a membership representing over 35,000 employees, including many of the key national and international players in the finance, legal, digital and communications sectors, the DBF is a key stakeholder in the Docklands’ area.

The Steering Committee is elected at the Docklands Business Forum AGM each year. Its role is to provide policy, governance and oversight for the Forum. It is a non executive committee and its members are not remunerated for their services on the Committee.

All content from Kiddle encyclopedia articles (including the article images and facts) can be freely used under Attribution-ShareAlike license, unless stated otherwise. Cite this article:
Dublin Docklands Facts for Kids. Kiddle Encyclopedia.