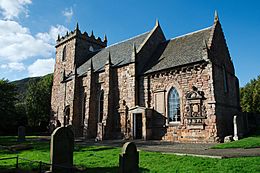 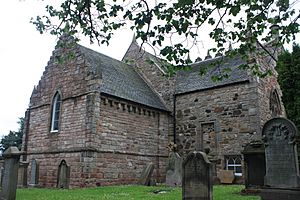 Duddingston Kirk from the north-east 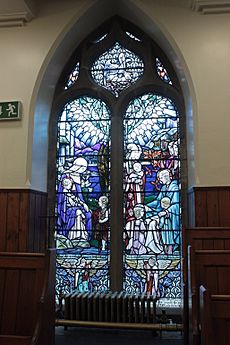 The memorial window to Joan Carfrae Pinkerton by Douglas Strachan 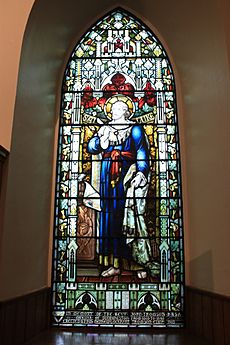 Duddingston Kirk is a Parish Church in the Church of Scotland, located adjacent to Holyrood Park in Duddingston Village, on the east side of the City of Edinburgh. Regular services are held at the kirk, conducted by the minister, Rev Dr James A. P. Jack (from 2001).

The church was built in or around 1124 by Dodin, a Norman knight, on land granted to Kelso Abbey by King David I of Scotland. As originally built, the kirk consisted of the chancel, nave and square tower. The traditional pattern of an east–west axis was adopted. The original entrance on the south wall includes a particularly fine example of Scoto-Norman stone carving, with a round-topped doorway. Following the enlargement of the parish boundaries, the Prestonfield Aisle was added in 1631. This consists of a gallery, downstairs area and burial vaults were on the north side. In 1968 the kirk’s interior was reconditioned, with the former pipe organ removed.

The entrance to the kirkyard from Duddingston village is notable for its gatehouse, built as a lookout point to deter "bodysnatchers" in the early 19th century. The Edinburgh bodysnatchers, known as "resurrectionists," stole recently buried corpses to sell to anatomists, and, as in the notorious case of Burke and Hare, sometimes also resorted to murder.

Given its proximity to central Edinburgh, Duddingston has long been a favourite location for many of the city’s artists and professionals. The novelist Walter Scott was ordained an elder at Duddingston in 1806.

The kirk has also been used as a venue during the Edinburgh Festival Fringe.

The minister in the 1780s was Rev Bennet.

A famous and widely admired minister in the early 19th century (1805–1840) was the Reverend John Thomson, a notable painter and friend of Raeburn and Turner. He referred to his parishioners (and large family) as "ma bairns" and hence one possible explanation of the popular Scottish expression "We’re a' Jock Tamson’s bairns". [Note the plaque opposite the church.)

The north triple window in the gallery is dedicated to Joan Carfrae, wife of the famous detective, Allan Pinkerton, who was born in Duddingston in 1822 and died in Chicago in 1887. The window is designed by Douglas Strachan.

The stained glass immediately east of the pulpit commemorates Dr Stevenson Macadam, an elder in the church.

Notable burials and memorials include:

All content from Kiddle encyclopedia articles (including the article images and facts) can be freely used under Attribution-ShareAlike license, unless stated otherwise. Cite this article:
Duddingston Kirk Facts for Kids. Kiddle Encyclopedia.