Duke of Noailles facts for kids 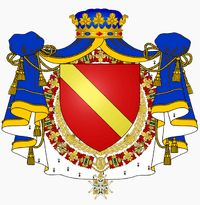 Coat of arms of the Dukes of Noailles as peers of France.

The title of Duke of Noailles was a French peerage created in 1663 for Anne de Noailles, Count of Ayen.

Noailles is the name of a great French family, derived from the castle of Noailles in the territory of Ayen, between Brive and Turenne in the Limousin, and claiming to date back to the 11th century. It did not obtain fame until the 16th century, when its head, Antoine de Noailles (1504–1562), became admiral of France and was ambassador in England during three important years, 1553–1556, maintaining a gallant but unsuccessful rivalry with the Spanish ambassador, Simon Renard.

The title of Duke of Ayen was also given to the family. However, the heir to the Noailles dukedom was usually called the Prince of Poix.

The family owned a lavish townhouse in Paris called the Hôtel de Noailles.

The present holder of the title is Hélie de Noailles, but as France is now a republic, titles are not officially recognised.

All content from Kiddle encyclopedia articles (including the article images and facts) can be freely used under Attribution-ShareAlike license, unless stated otherwise. Cite this article:
Duke of Noailles Facts for Kids. Kiddle Encyclopedia.