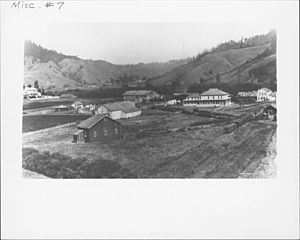 Duncans Mills was once part of the Rancho Muniz Mexican land grant.

In 1877, Alexander Duncan established a sawmill in what is today Duncans Mills. The mills sent lumber to the growing city of San Francisco.

The town was founded in the 1870s. It featured two hotels, a general store, a saloon, a meat market, blacksmith, livery stable, and a notion shop.

Starting in the 1870s, the narrow-gauge North Pacific Coast Railroad ran through Duncans Mills on its way from Cazadero, California to Sausalito. After being sold several times, the railroad ceased operation in the 1930s. The town slowly faded, until a 1976 restoration project, associated with the celebration of the U.S. Bicentennial, brought about a period of building restoration and business re-vitalization.

Today, Duncans Mills resembles the way it was originally built. It has an authentic Northwestern Pacific Railroad Depot and several original cars from the old railroad line. A California State Park Ranger Station is located in one of the old railroad buildings as the California State Park Store with a selection of books and maps about the area. The Blue Heron Restaurant has served as the destination entertainment center of the town for decades.

Duncans Mills is located on the Russian River about 4 mi (6 km) from the Pacific Ocean. It straddles State Route 116. 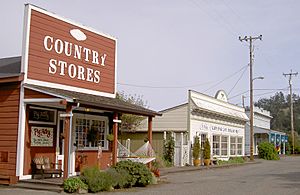 All content from Kiddle encyclopedia articles (including the article images and facts) can be freely used under Attribution-ShareAlike license, unless stated otherwise. Cite this article:
Duncans Mills, California Facts for Kids. Kiddle Encyclopedia.