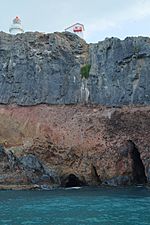 The Dunedin Volcano is an extensively eroded multi-vent shield volcano that was active between 16 and 10 million years ago. It originally extended from the modern city of Dunedin, New Zealand to Aramoana about 25 km away. Extensive erosion has occurred over the last 10 million years and Otago Harbour now fills the oldest parts of the volcano. The remnants of the volcano form the hills around Otago Harbour (including Mount Cargill, Flagstaff, Saddle Hill, Signal Hill, and Otago Peninsula). Volcanism began in a shallow marine environment. The volcano became larger with flows of basalt and minor trachyte creating the bulk of the volcano. The final phase of eruptions are preserved as phonolite domes around Mount Cargill.

Traces of the old Dunedin Volcano are best seen in the Dunedin Botanic Garden's geology walk, the cliffs at Aramoana and the geomorphology of Mount Cargill which has preserved lava domes. Basaltic columns are also to be found as prominent features above Second Beach at St Clair and at Blackhead.

The Dunedin Volcano was originally centred on Quarantine Island (centre of the image) and is now highly eroded. There is speculation that it may have been up to 1000m high.

All content from Kiddle encyclopedia articles (including the article images and facts) can be freely used under Attribution-ShareAlike license, unless stated otherwise. Cite this article:
Dunedin Volcano Facts for Kids. Kiddle Encyclopedia.