St Clair is a leafy residential suburb of Dunedin, New Zealand. It is located on the Pacific Ocean coast five kilometres from the city centre on the southwesternmost part of the coastal plain which makes up the southern part of the urban area, and also climbs the slopes of Forbury Hill immediately to the west of this plain. St Clair's 2001 population was 4,179.

St Clair's main geographical features are St Clair Beach, the western end of the long beach (Ocean Beach) which stretches along the city's southern shore, and the promontory of Forbury Hill which rises 159 metres (522 ft) above the plain. The summit of the hill lies within the grounds of St Clair Golf Course, in the west of the suburb.

Forbury Hill's flanks include a large cliff face one kilometre inland from the beach and a rocky headland which juts into the Pacific Ocean. The small outcrop of White Island lies to the immediate south of St Clair beach. The inland cliff, which runs parallel with and to the west of Forbury Road, was the site of a quarry in the early days of the city. The city's largest retirement village and its only meetinghouse for the LDS Church both lie in the shadow of this cliff.

The beach and the dunes are often the victims of erosion if weather patterns see series of storms hit the city from the south. Such erosion between 2002 and 2007 saw emergency measures taken to add sand to the dunes in 2007 and 2008. Further erosion in 2013–2015 encroached on the dunes to the extent that a public footpath inland from the top of the dunes was permanently closed. The erosion is a long-term ongoing concern, as evidenced by attempts at beach protecting begun in 1904 which saw the addition of sturdy wooden piles and sandbreaks to the beach. The last surviving sets of wooden posts from these efforts are a landmark of St Clair Beach, often seen as being the dividing line between St Clair and Middle Beaches. Heavy storms during the winter of 2015 left these posts in a poor condition, and it is likely they will not survive many more years.

Another beach, Second Beach, lies to the west of St Clair Beach, separated from it by a rocky outcrop on which lies St Clair Hot Salt Water Pool. Second Beach is rocky rather than sandy, and is flanked by cliffs that form the head of Forbury Hill, some of which include hexagonal basalt columns, one of three such outcrops in Dunedin (the others being at Blackhead, further to the west, and at the Organ Pipes formation on Mount Cargill. This natural amphitheatre is now largely wild but easily reached by a footpath leading from behind the Salt Water Pool. A distinctive feature of Second Beach is a natural blowhole, located at its southwestern end, at the far end of the footpath. Second Beach was the site of quarrying operations in the early days of Dunedin, but only the overgrown remnants of concrete walls are today left of this.

A small stream runs from the flank of Forbury Hill, passing into a culvert before reaching the sea at the western end of St Clair Beach. Bedford Street, a main thoroughfare from the flat part of the suburb to its hillier parts, follows the steep valley of this stream for much of its short length.

The suburb is surrounded by the suburbs of Corstorphine, Kew, Forbury, and St Kilda. Its main roads are Forbury Road, Bedford Street, Bay View Road, Ravenswood Road, and Allandale Road, with a small shopping area close to the junction of Allandale and Forbury Roads. Victoria Road, which begins at the edge of the suburb, also links it with St. Kilda. An esplanade runs along the coast from the southern end of Forbury Road (where it joins Bedford Street and Victoria Road), and is the site of several restaurants and cafes. 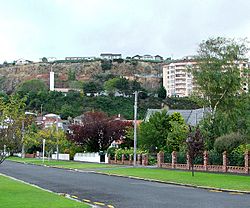 The Frances Hodgkins Retirement Village and the spire of Dunedin's LDS Church meetinghouse are visible against the cliffs of the former quarry that lies to the west of Forbury Road.

St Clair Beach is a popular summer destination for Dunedinites. It is one of the South Island's more popular surfing venues and is also home to the St Clair Surf Life Saving Club. At the western end of the beach, under the shadow of Forbury Hill, lies the St Clair Hot Salt Water Pool, an open-air public swimming pool nestled within rocks a handful of metres from the sea. The beach is also the site of the city's annual "midwinter plunge", which sees residents brave the chilly waters every year at the winter solstice. The beach's sea wall, esplanade and oceanway were rebuilt and renovated in 2004. In recent years the esplanade area has become a hub of culture with many cafes, restaurants and bars.

One of the city's wealthier suburbs, many fine houses are situated in the upper part of St Clair on the slopes of Forbury Hill. This part of the suburb is often referred to as St Clair Park, possibly a reference to the St Clair golf course - one of the city's main courses - which straddles the top of the hill. Near to this are the ruins of Cargill's Castle, a former stately home built for early settler Edward Cargill in 1877.

The twin single-sex secondary schools of King's and Queen's lie close to the point where St Clair, St Kilda and Forbury meet. As a residential suburb, industrial activity in 21st century St Clair is negligible. 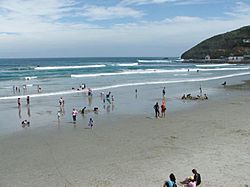 St Clair Beach, with the head of Forbury Hill in the background. The swimming pool is visible close to the ocean's edge at top right.

The smaller, less well-defined suburb of Forbury lies immediately to the north of St Clair, between it and Caversham. Forbury lies largely in the shadow of the cliff face that is located one kilometre inland from St Clair Beach, and stretches to the east of this cliff across the plain towards South Dunedin. Apart from Caversham and St Clair, Forbury is bounded by St Kilda in the south, Kew in the west, and South Dunedin in the east.

The name Forbury is somewhat confusing, as it is used for several local features, not all of them within the suburb. Notable among these is Forbury Park Raceway, one of the city's main horse-racing venues, which actually lies in St Kilda. Forbury Corner, an important road junction, lies in Caversham, though not far from the northern boundary of Forbury. 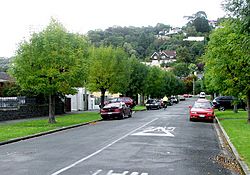 Valpy Street is named for the suburb's founding father, W.H. Valpy. His homestead was located close to the brown and white house on the slopes of Forbury Hill in the background of this picture.

There is known to have been Māori settlement in the area close to what is now St Clair Esplanade in pre-European times, with artefacts having been discovered close to the western end of the Esplanade and also occasionally uncovered in the dunes which lie to the east. It is believed that there was also a burial site close to Cargill's Castle. A major pre-European track led along the length of the dunes and from there over Forbury Hill to connect with the land to the south.

The name Whakaherekau was used by Māori for the coastal strip encompassing parts of what are now St Kilda and St Clair. This has been translated as meaning either "To make a conciliatory present" or "A prepared snare which caught nothing".

Early European settlement in the area was led by William Henry Valpy (1793–1852). Valpy and his family arrived in New Zealand in 1849, setting up a 48 ha (120 acres) farm property centred on what are now Valpy Street and Norfolk Street. The property was named "The Forbury" after Forbury Gardens, a public gardens in Reading, Berkshire. Valpy was born in Reading, where his father Richard Valpy had been a schoolmaster. Valpy was reputedly the wealthiest man in New Zealand.

Chinese settlers were notable among early residents in the St Clair area, and largely through their effort the swampy land inland from the beach was drained, and converted into market gardens. Much of the young city's vegetable production was centred on Chinese allotments in an area close to what is now Macandrew Road, Forbury. Habitation remained sparse until the early twentieth century, but rapid growth immediately prior to World War I saw the population expand. 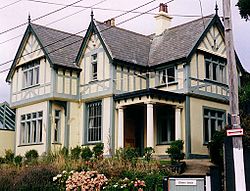 The suburb was largely populated by the city's more wealthy residents, with impressive houses by Francis Petre built close to the beach in Cliffs Road, two of which survive. Noted early residents included the Petres, the Cargills, the Sideys (including Sir Thomas Sidey), and the McIndoes. The McIndoe family included the founder of one of the city's main printing firms, John McIndoe, and Sir Archibald McIndoe, a pioneer in the field of plastic surgery.

There was also major industry in the early days of the suburb, with both horticulture and quarrying being of importance. The latter supplied many of the materials for C & W Shiel's brickworks, one of the early city's most important industries. The brickworks lay on the eastern side of Forbury Road with a quarry to the west (the quarry is now the site of the LDS Church meetinghouse and the Francis Hodgkins Retirement village); the brickworks were fed via a conveyor over a structure which bridged Forbury Road.

The St Clair Beach has been a popular attraction for Dunedinites since the early days of the city. In 1912 a grandiose two-storeyed pavilion was erected on the esplanade, which was a popular if short-lived structure, burning to the ground in 1915. The site of the pavilion was later used for a band rotunda, though it too has long gone.

The cliffs above Second Beach were the site of a gun battery – part of a coastal defence system – from the 1880s until the end of World War I. Nothing now remains of the battery, the site of which was later subdivided for residential use.

In May 2013, the suburb's esplanade began collapsing, with numerous sinkholes appearing in the walkway. Walls meant to block off the sea, built in 2004 to replace those built in the 1880s and 1914, were leaking.

All content from Kiddle encyclopedia articles (including the article images and facts) can be freely used under Attribution-ShareAlike license, unless stated otherwise. Cite this article:
St Clair, New Zealand Facts for Kids. Kiddle Encyclopedia.